You have permission to edit this article.
Edit
Just Visiting
Attractions
Calendar
Dining
Arts
Music
1 of 10 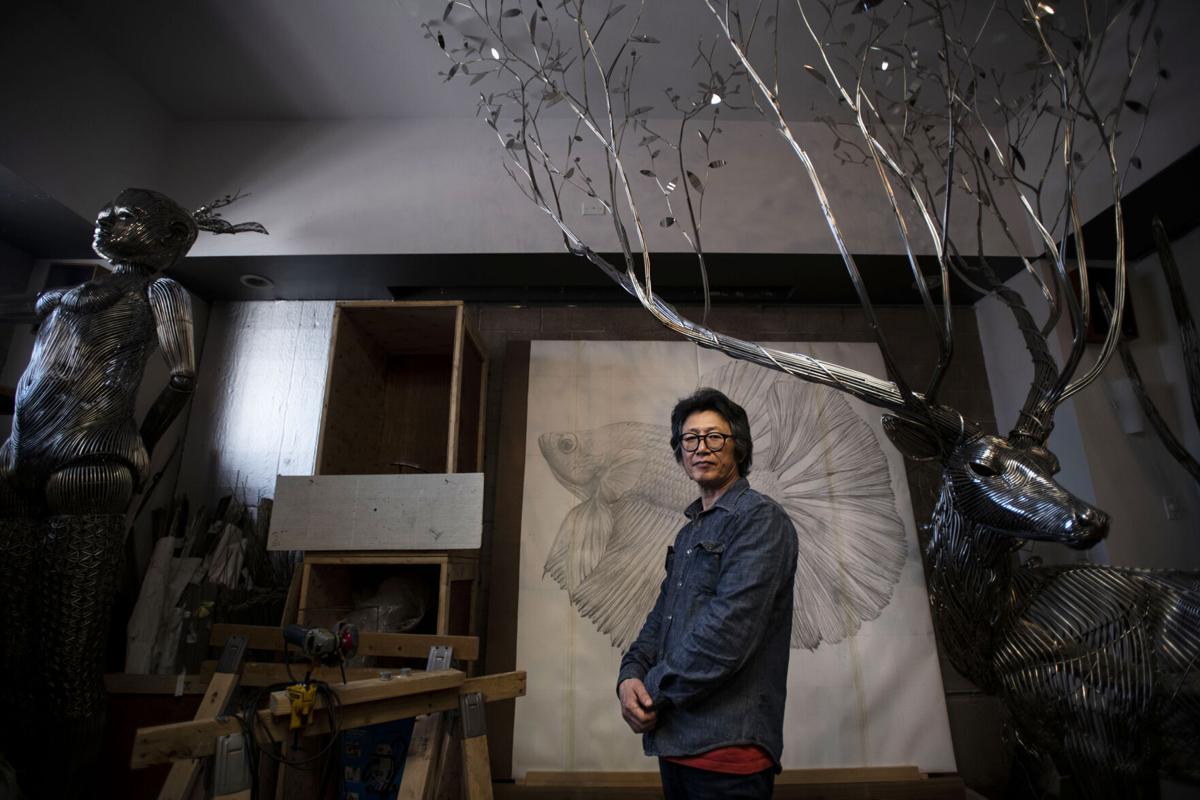 South Korean sculptor Byeongdoo Moon, 53, in his studio in Colorado Springs last month. Moon and his family moved to the Springs at the end of November. His wife is also an artist. 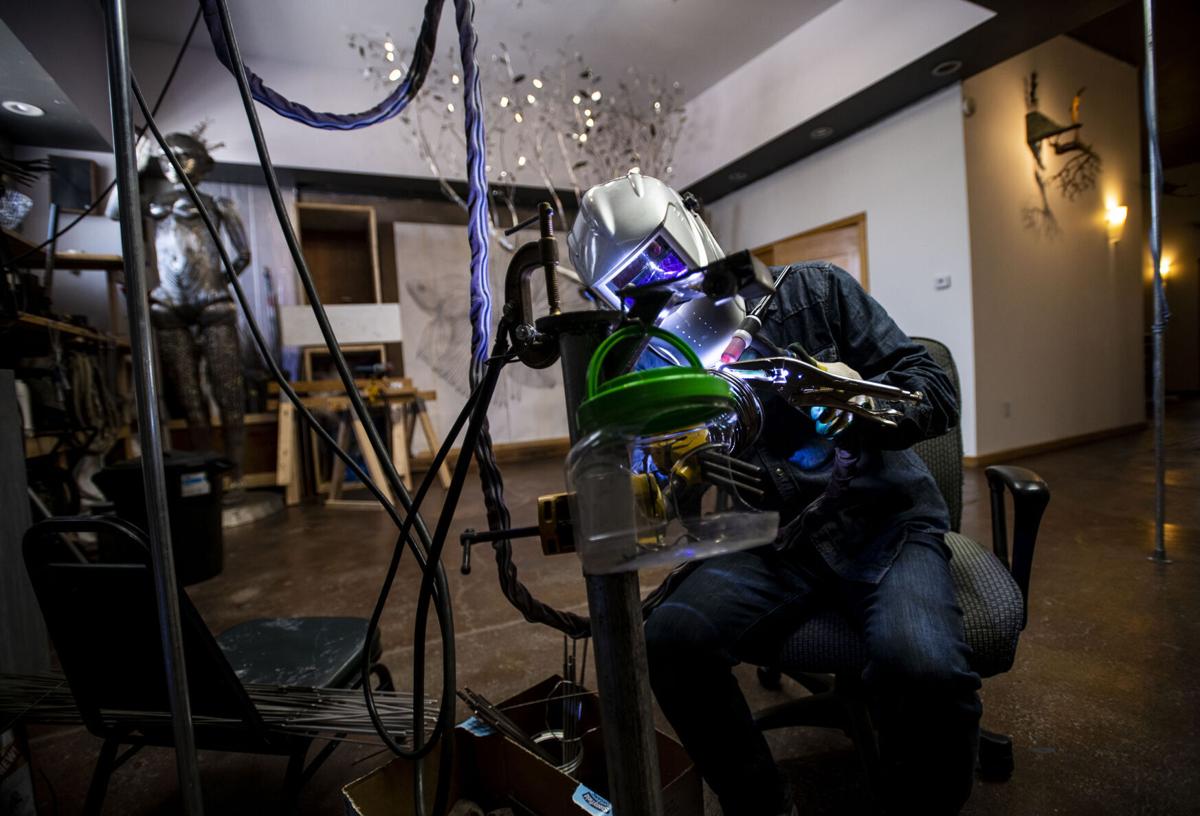 South Korean sculptor Byeongdoo Moon, 53, uses a welder in his studio in Colorado Springs last month. After traveling to Colorado Springs multiple times over the past few years, Moon fell in love with the city and relocated his family here. 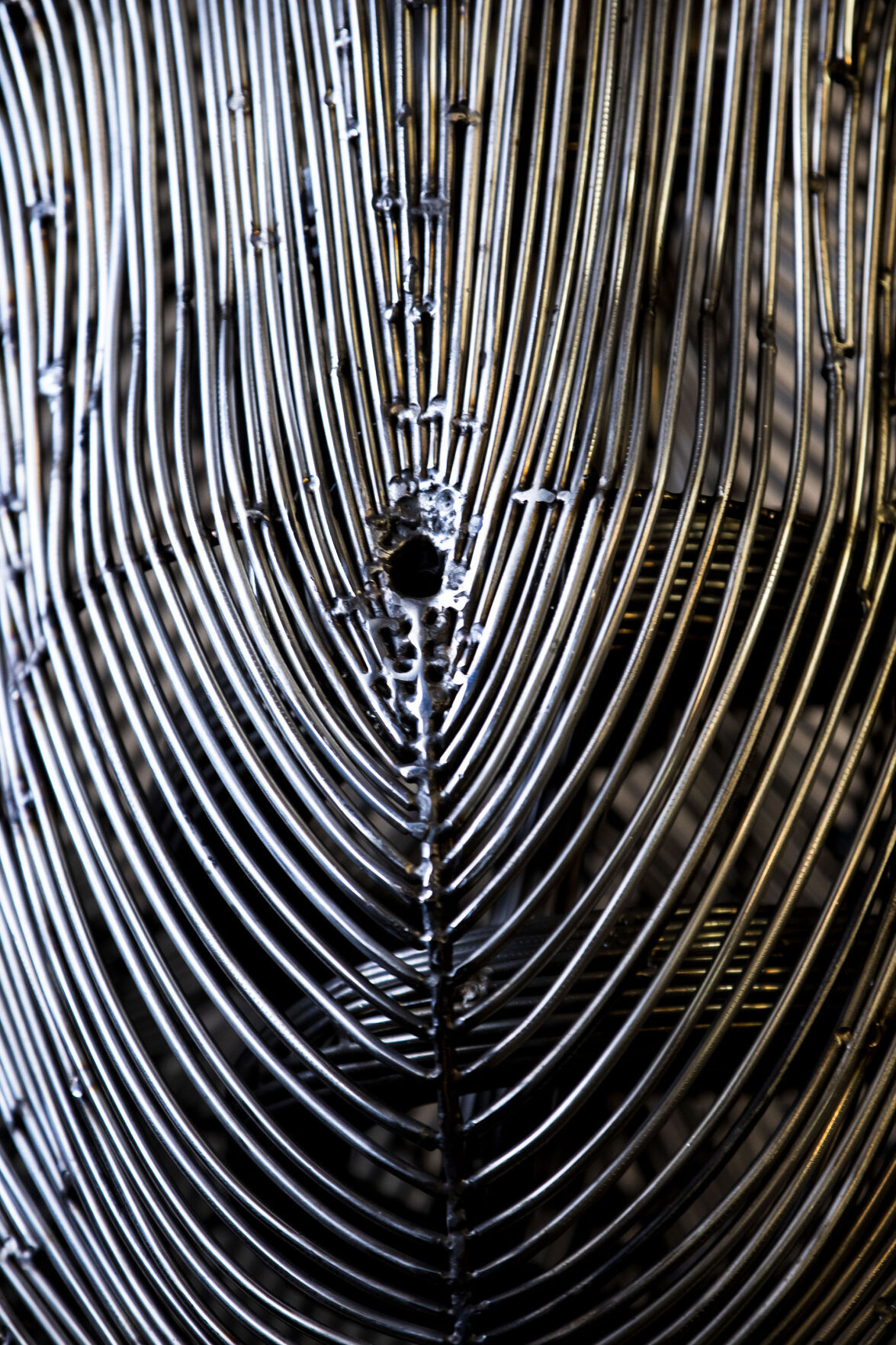 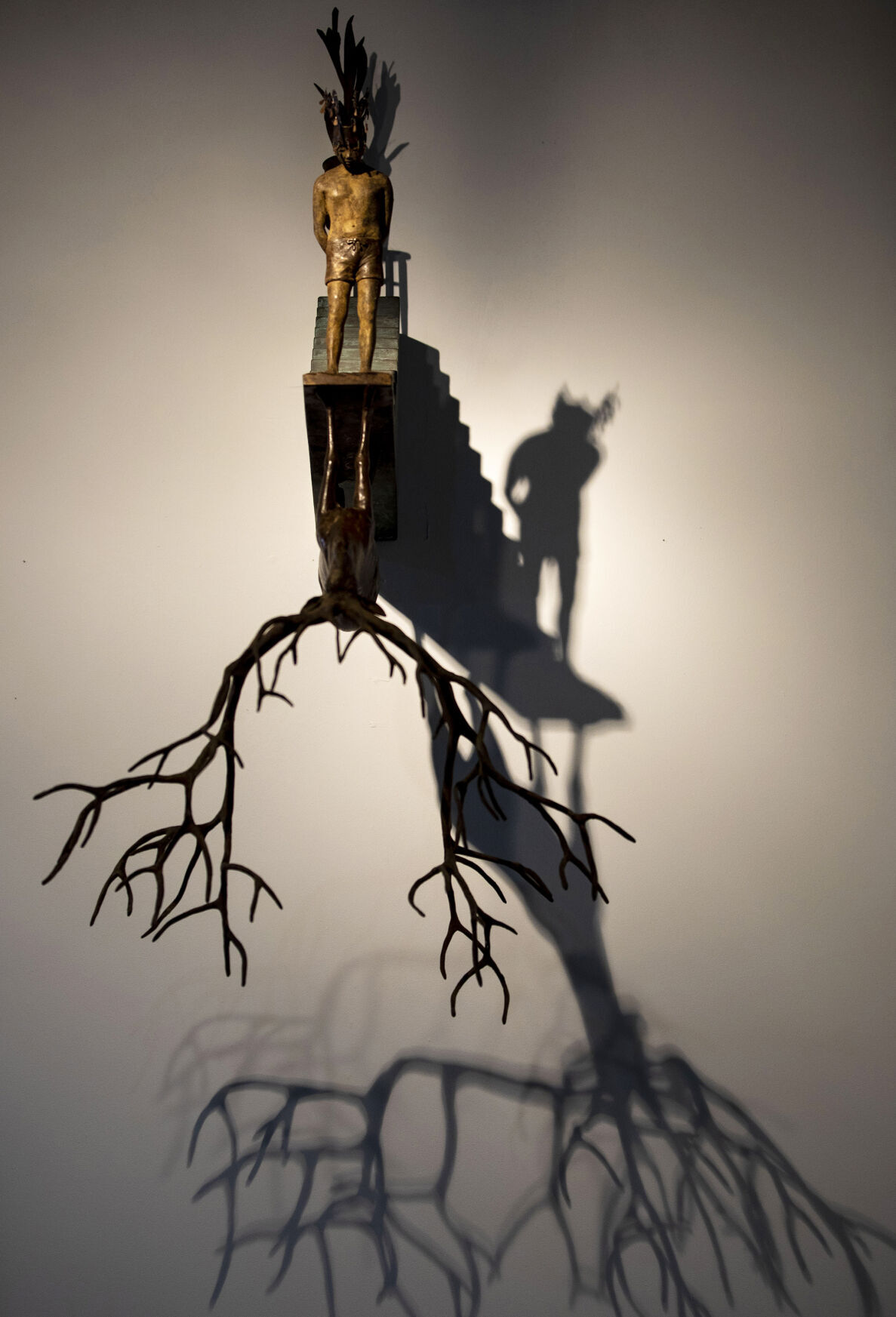 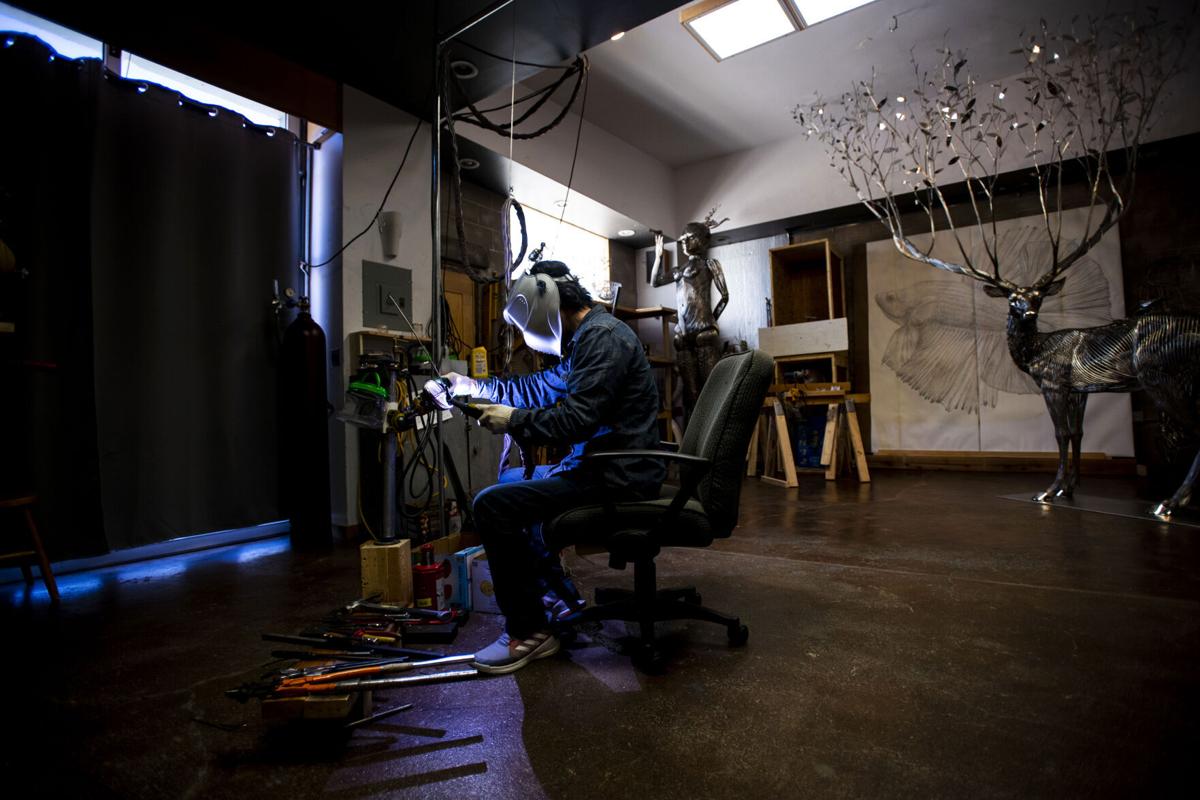 South Korean sculpture Byeongdoo Moon, 53, uses a welder in his studio in Colorado Springs on June 9, 2021. After traveling to Colorado Springs multiple times over the past few years, to repair his first two Art on the Streets sculptures after they were vandalized, Moon fell in love with the city and relocated his family here. 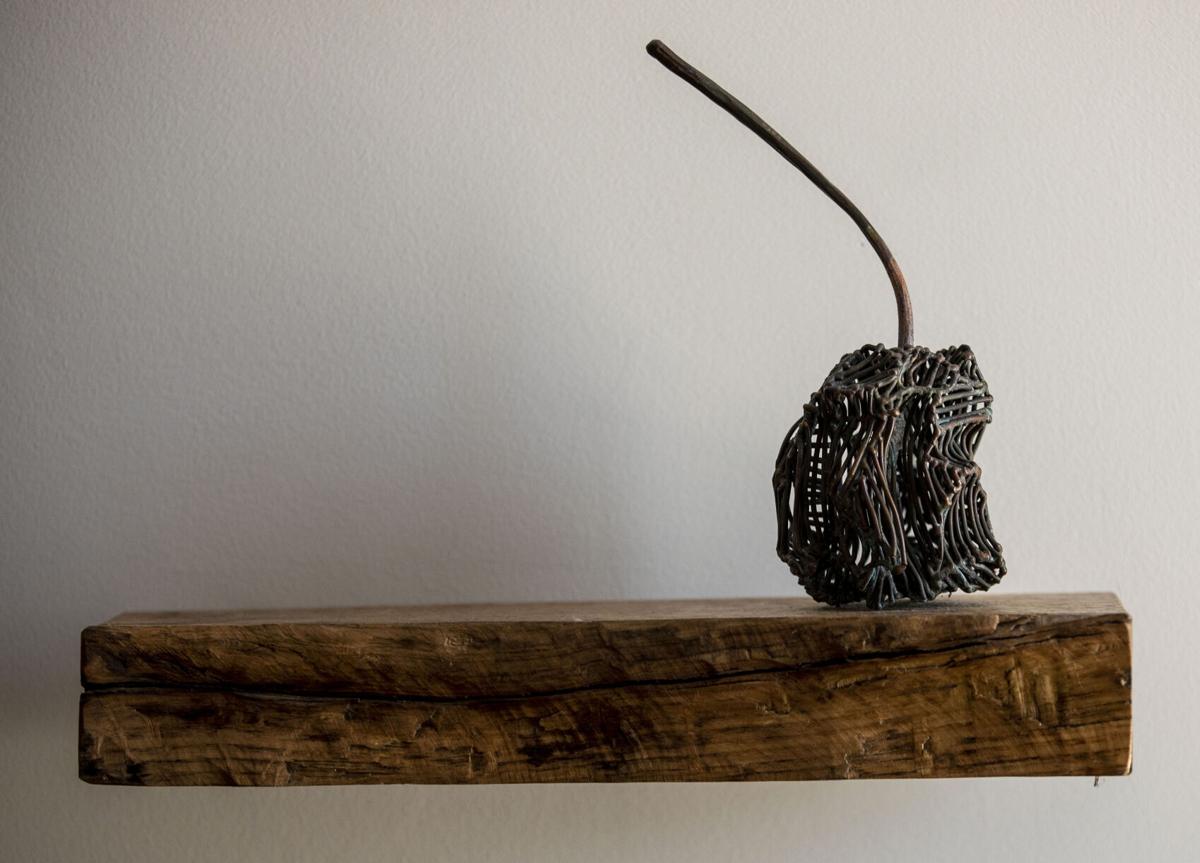 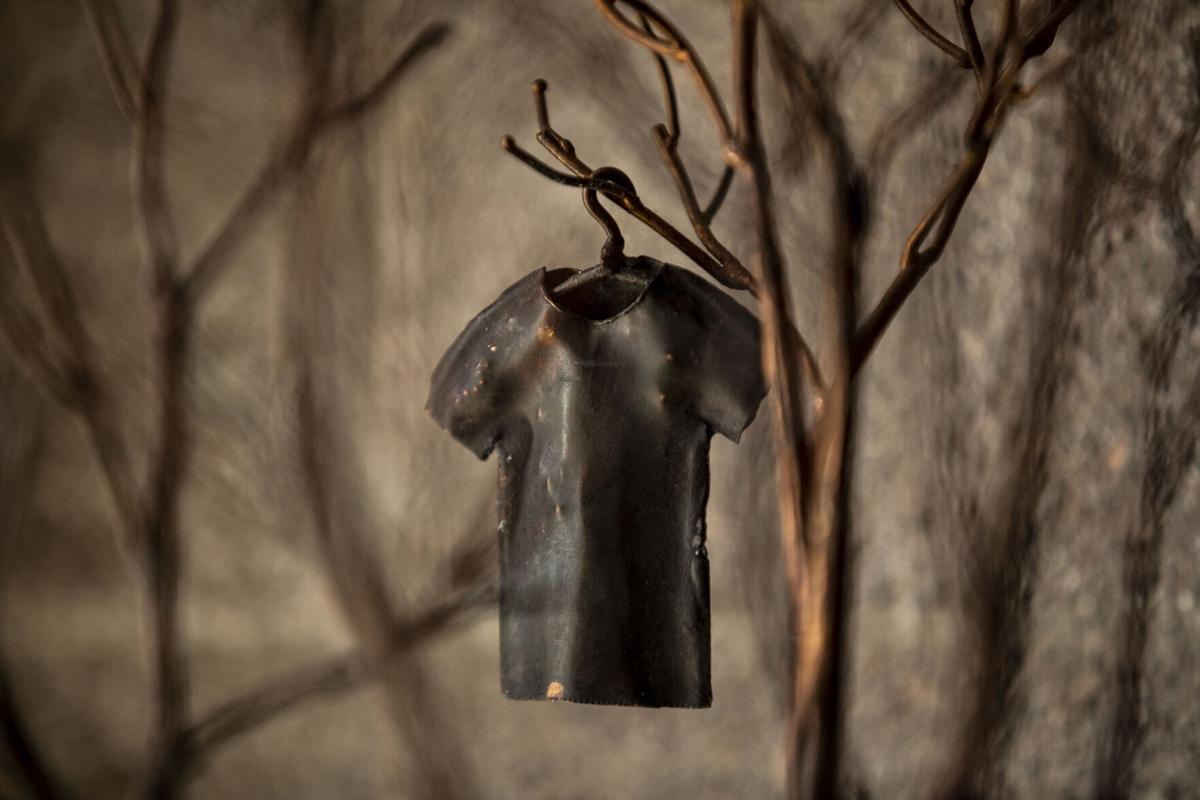 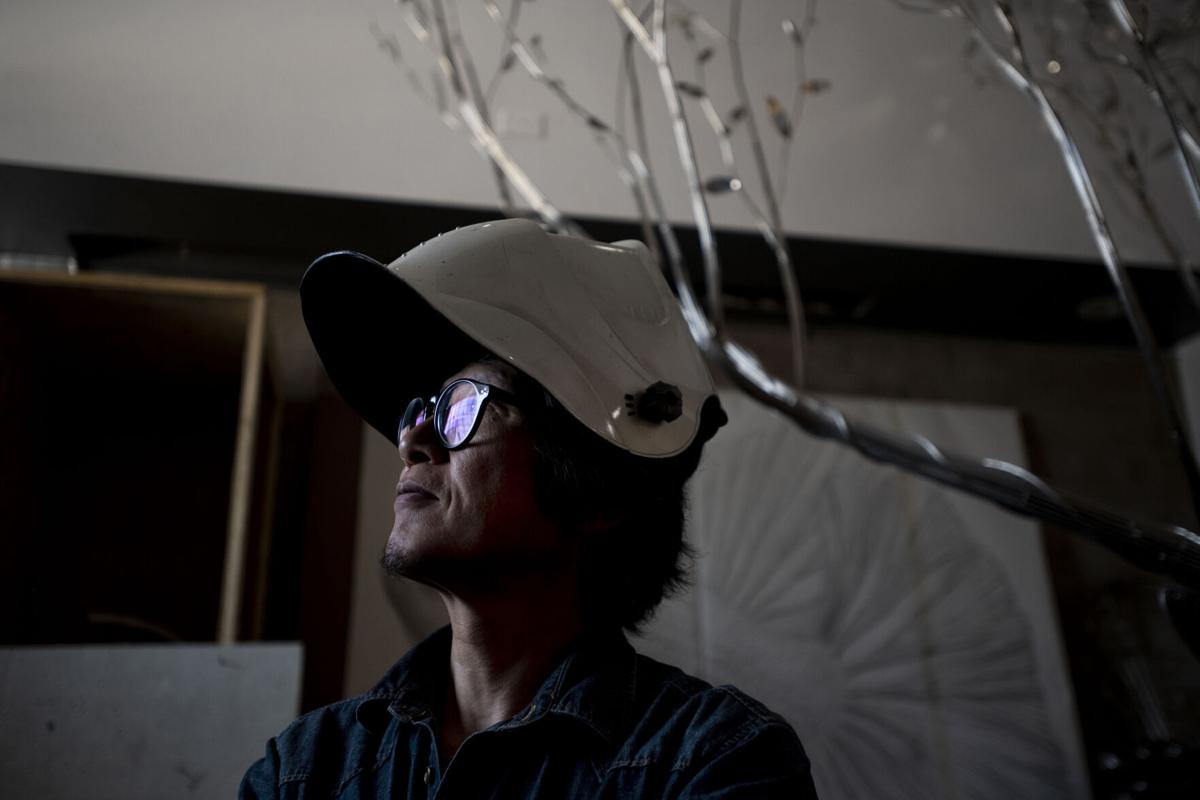 South Korean sculpture Byeongdoo Moon, 53, in his studio in Colorado Springs on June 9, 2021. After traveling to Colorado Springs multiple times over the past few years, to repair his first two Art on the Streets sculptures after they were vandalized, Moon fell in love with the city and relocated his family here. 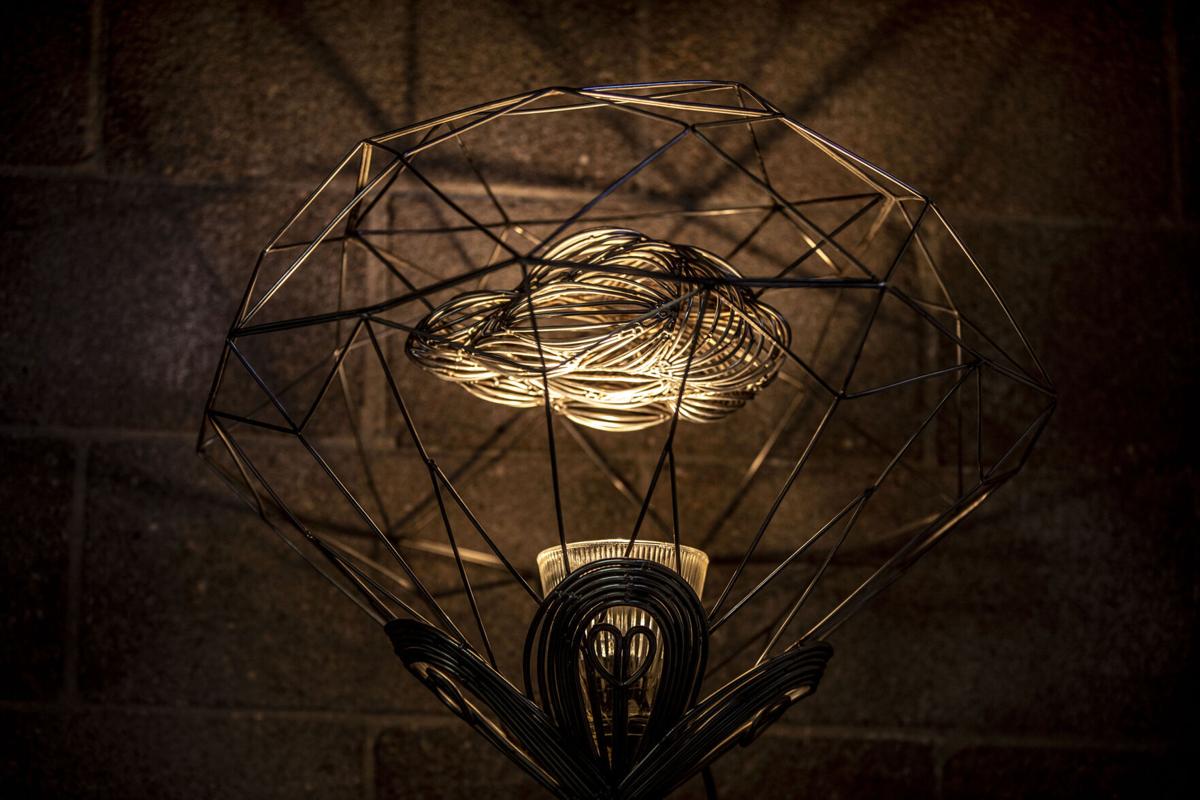 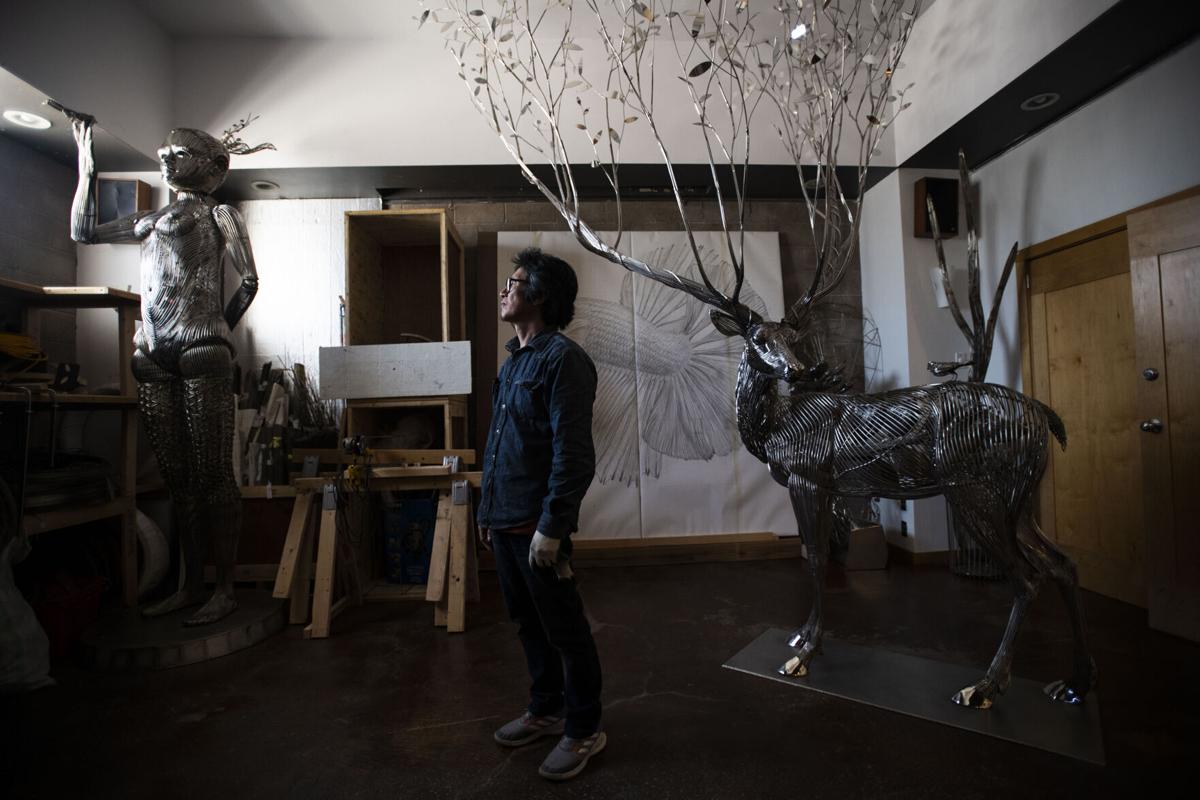 South Korean sculpture Byeongdoo Moon, 53, in his studio in Colorado Springs on June 9, 2021. Moon fell in love with the city and relocated his family here.

South Korean sculptor Byeongdoo Moon, 53, in his studio in Colorado Springs last month. Moon and his family moved to the Springs at the end of November. His wife is also an artist.

South Korean sculpture Byeongdoo Moon, 53, uses a welder in his studio in Colorado Springs on June 9, 2021. After traveling to Colorado Springs multiple times over the past few years, to repair his first two Art on the Streets sculptures after they were vandalized, Moon fell in love with the city and relocated his family here.

South Korean sculpture Byeongdoo Moon, 53, in his studio in Colorado Springs on June 9, 2021. Moon fell in love with the city and relocated his family here.

Inside a clean, light-filled studio on Colorado Springs’ southwest side, Byeongdoo Moon creates sculptures that burrow deeply into the hearts of residents.

In one corner looms a piece that will be familiar to any frequenter of downtown — a large, stainless steel deer, with antlers that stretch upwards, morphing into long branches with leaves. A small bird perches on its hind end. And if you peer closely enough, you’ll see the steel cactus that lives inside the deer’s torso. A similar version of the deer stands in the median of Colorado and Cascade avenues.

In the other corner of Moon’s studio, an imposing sculpture of a woman with a marionette component gazes out over the room. Titled “Your Place,” it’s about feminism and breaking the glass ceiling.

The internationally known and award-winning artist’s stainless steel sculptures speak volumes, but there is one overarching question at the core of his work: What is visible and what is invisible?

“The whole piece is made of boundaries,” writes the South Korean sculptor in an artist statement about his intricately designed works. “Boundaries allow us to see into our imagination, between what is and what is not.”

In a brave-hearted leap, and yearslong process to acquire a U.S. visa, the artist relocated his family to Colorado Springs at the end of November. He became entranced with the art-thirsty city after his first piece, the aforementioned deer, “I have been dreaming to be a tree,” was accepted into the internationally known Art on the Streets, an outdoor sculpture exhibit that lures visitors downtown throughout the year. His third piece for the program, “Air or Water,” was recently suspended from the front of the Plaza of the Rockies building.

“I was excited our community has proved itself attractive to an artist of such stature,” said Claire Swinford, executive director for Downtown Ventures. “He has a fan club, for sure. When I tell people he lives here, the delight on their faces is indicative of Colorado Springs as a special place, and for the artist to see that and want to be part of that feels good, especially for a community with a strong artistic tradition that is overlooked in favor of other things that make the city unique.”

From halfway around the globe, Moon helped create a more alluring landscape in the Springs. His debut piece was so dazzling the city acquired it for its permanent art collection the following year.

And then came the 2018 Art on the Streets piece, “You, Light as a Cloud,” the giant cat perched next to a snipe on a bench near Boulder Crescent Park. This summer’s “Air or Water” features two large stainless steel fish swimming in circles around each other.

“My artwork ‘Air or Water’ is experiencing a space where the air turns into water,” wrote Moon in his artist statement. “This is a story about fish sharing water and people sharing air, and both share the same planet. You will be able to feel the air and the water through the fish, like swimming in the air. I hope people can feel the world we are sharing together.”

While the ending is happy, there was trouble along the way. The first two of Moon’s three pieces were vandalized. In the first happenstance, a weekend reveler decided to hang off one of the deer’s antlers, bending it out of shape. It was disappointing, but a relatively easy fix, Swinford said. It was more disheartening the following year when somebody wrenched the snipe off “You, Light as a Cloud” and fled.

Upset residents wrote letters, telling Moon they loved his pieces and apologizing for the vandalism: “I am so sorry someone was so selfish as to vandalize the beautiful sculpture you loaned to our city. ‘You, Light as a Cloud’ was my favorite piece of this year’s (Art on the Streets) installation. I was intrigued by the intricate wire work but more so loved the apparent friendship captured. Your artwork made me hope many supposed ‘enemies’ can one day come together and be friends. Please accept my apology on behalf of the selfish and thoughtless person that damaged your wonderful artwork,” wrote resident Nancy Wallace.

Moon’s response was generous — he created a new flock of Colorado-specific birds, stuffed them in his suitcase and flew to the Springs to attach them. And in the middle of it all, the original snipe was found under a bush in Monument Valley Park and returned. While he was disappointed by the vandalism, the public’s love letters filled his heart.

“He (Moon) said they have a legend about the snipe that he put into the sculpture,” Swinford said. “It takes to the air as a fledgling and doesn’t land until it’s ready to end its life. It continues to fly supported by other birds. That’s how it rests. He said people of Colorado Springs are supportive of him as he’s depicting Colorado birds supportive of the snipe. It was a lovely sentiment.”

The missing snipe revealed to Moon a city with a rich arts and cultural community that supported him. He was already a fan of the region, after a visit to install his first sculpture, but the outpouring of admiration solidified his decision to relocate his family.

“I was surprised by how much my work was loved by the people in town,” Moon said, as translated by his 19-year-old son, Ju Whan. “Korean people are always busy taking care of each other, and don’t have time to appreciate the work. Here people love the work. They walk in the studio to say they love the work.”

You’ll know Moon’s studio by the giant stainless steel cat guarding the front door. But this isn’t only Moon’s studio. His wife, Hyewon Sim, also is an artist. Inside the front door is her textile art studio. Your attention is immediately captured by two pieces of navy blue and off-white fabric art, reminiscent of octopus tentacles. The pieces are a tribute to her mother, who died two weeks before the family moved to America. On another wall are sophisticated ink drawings of flowers and their roots.

Turn the corner into a small gallery, and you’re among Moon’s small, stainless steel pieces. A dry and rotting apple with a long stem and core stands on display. Two smaller versions of fresh apples roost nearby. And there’s a sculpture of a sweet potato with roots. It’s alive, Moon said. It continues to grow while everything else dies, such as meat.

In the largest space, Moon pays daily attention to his pieces, which live around the world in Australia, China, Hong Kong and Denmark. Colorado is the only state in the U.S. to house his sculptures. As he works, he listens to New Orleans jazz, Nina Simone, Diahann Carroll and Édith Piaf — music he discovered while studying Western art history.

His creativity bloomed in middle school, when he drew cartoons and sci-fi illustrations, but he dreamed of being a scientist. He was curious about the way things worked. Eventually, he turned that thirst for scientific knowledge into art, and began to draw his questions about whatever made him curious. He earned bachelors and masters degrees in sculpture, and began to build his giant public art pieces at 25.

“I always wanted to communicate through public art,” Moon said. “Work should have size to have an impact outdoors.”

His lifelong love for science is evident in his subjects: trees, animals, the natural world.

“Those are elements with a long history, generations long,” Moon said. “Through objects I think of a really long time. I wish when people see the trunk of an elephant they would think how long it took to be those shapes, and through that feel the beauty of them.”