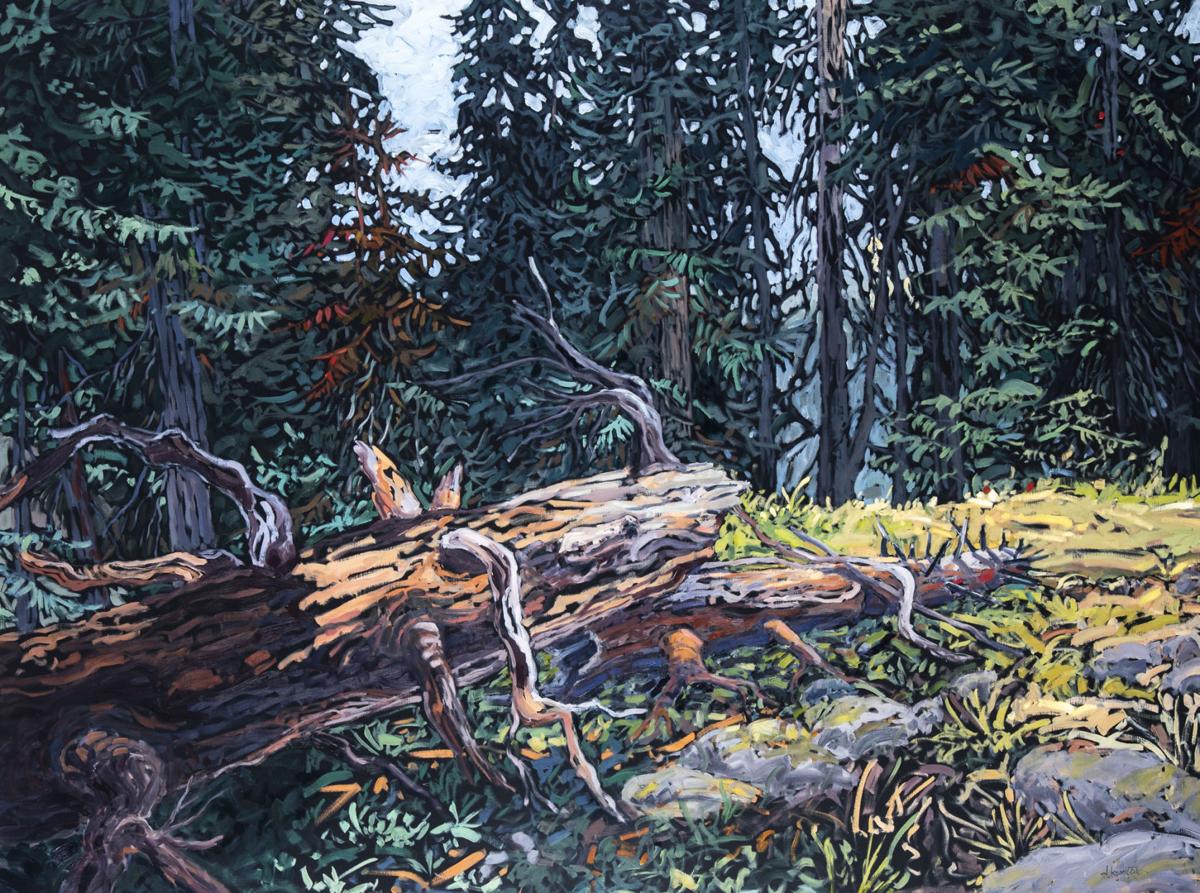 “Fallen But Not Forgotten” by Deb Komitor. 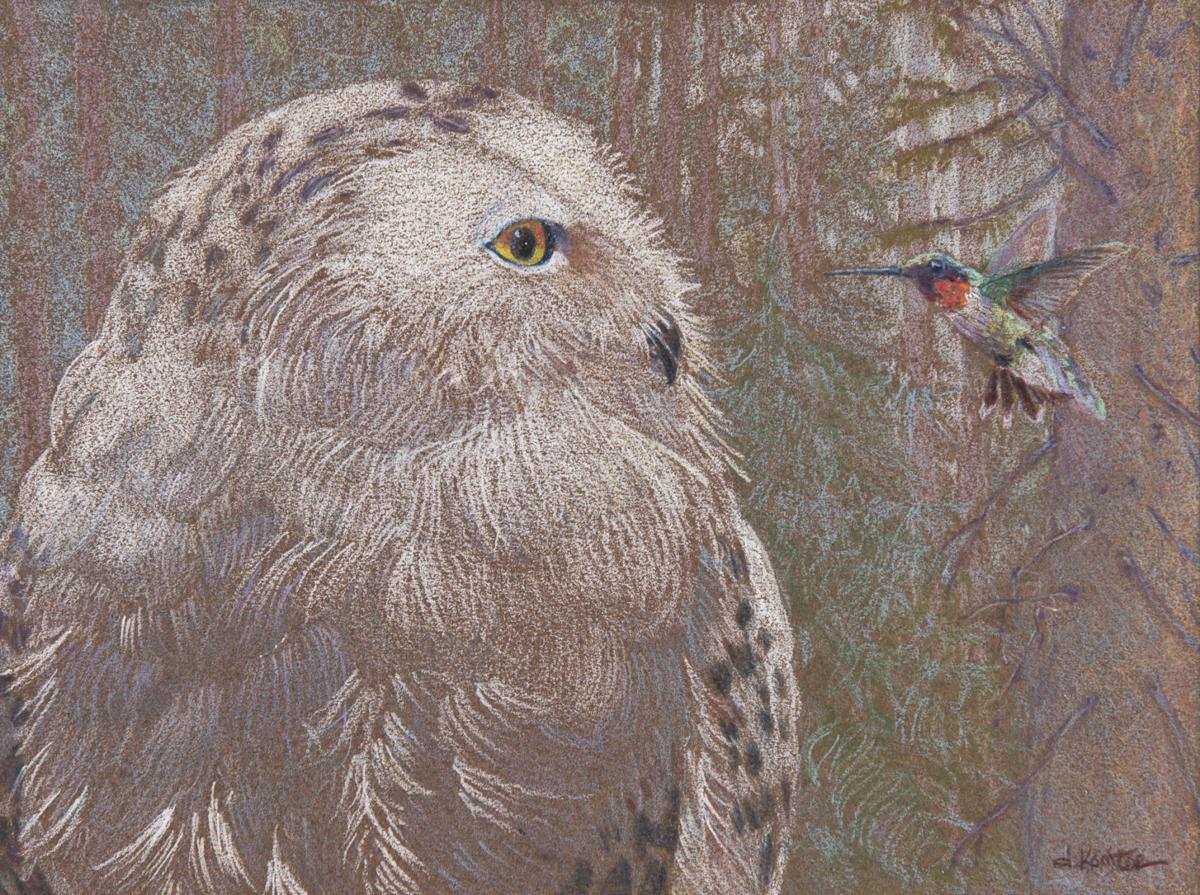 “Fallen But Not Forgotten” by Deb Komitor.

Trees are one of Deb Komitor’s true loves.

Her affairs are numerous, long, lush. She sounds dreamy as she remembers the redwoods in California’s Jedediah State Park, where she made her husband stop the car in the middle of the road so she could get out and gaze up at the canopy of tree limbs and trunks stretching overhead. The poignant moment brought her to tears.

“It felt like I’d found my ancestors, these big amazing trees that have been here so long,” says the longtime Colorado Springs artist. “It felt like going home. We’re just a blip in their lives.”

And then there was the rainforest in Washington’s Olympic National Forest, and the cottonwood trees along Shooks Run Trail near her downtown home. There’s also the gnarly, twisting locust tree and the century-old maple tree in her own yard — it was a deciding factor in buying the home. But when it came time to trim the stately creature, she had to vamoose.

“I couldn’t be here when they cut the limbs because I could feel it,” she says.

Musicians can't go on tour right now. Here are ways to support them

The same went for a grove of cottonwoods outside her former art studio, which were all cut down: “I cried and couldn’t stand being in the studio after that.”

What does an artist do with all those emotions but pour them back into her work? She paints what she’s loved since childhood — tall trees, fallen trees, the creeks and trails that wind through and around them, and sometimes the creatures of the forest. Komitor’s oil paintings are large, often coming in at 36 inches by 80] inches, though she also does smaller colored pencil drawings. Her paintings are created over a black gesso background, which peeks through her short brush strokes. It makes the paintings more somber, she says, but also “shows a reverence for nature.”

The award-winning artist’s works will be featured in the upcoming Kreuser Gallery exhibit “Windows on the Woods.” It’s scheduled to open May 1, though that’s in flux. If nothing else, those pieces will be displayed in a virtual show.

“I’m such an outdoors person, and her work speaks to me,” says Abigail Kreuser, owner of Kreuser Gallery. “It makes me feel like I’m outdoors. You get pulled into the piece. Her work is meditative. Her brush strokes and approach are unlike anybody in our region. There’s a different feel the further away you get from them and the closer in you get.”

Komitor paints in an unusual way (“I call it my dyslexic way of painting,” she says), starting from the foreground and moving into the background. The sky is last, which isn’t the typical way of doing things. It certainly wasn’t the way the Ohio-born artist was taught at Columbus College of Art and Design, where she earned a bachelor’s degree in painting, or Colorado State University, where she earned a master’s in painting.

When she first landed in the Springs more than two decades ago, she was busy creating landscape-based sculptural art, until she got an idea for a painting and bought the biggest canvas she could fit in her car. It spun her off in a new direction. And when the Waldo Canyon fire took out great swaths of trees and forests in 2012, she was inspired to focus on Mother Nature’s stalwarts.

“We lost our sense of permanence with them,” she says. “I wanted to document some of these great trees. It led me to the forest, and then people told me to go to the redwoods.”

Komitor has chosen to capture and relish in the quiet spaces in life. The forests and their silence can be as quiet as painting at her easel all day. She’s made for times like these, when introversion becomes a necessary way of life. But from there can come amazing work, be it a painting, song or prepared meal, she says.

“We can express that loneliness through our art. None of my landscapes have any humans. It’s all nature,” she says. “That’s where I find my peace and groundedness.”

Trees heal her. And what helps one can often help another. Last year she completed a commission from Penrose-St. Francis Health Services for four tree-themed paintings.

“These pieces are for the public, too, to calm us down and get grounded. In hospitals, people with trees outside their window can heal quicker. Looking at pictures of trees helps something in the body balance and is calming,” says Komitor.

Perhaps her pieces are so sought after because there’s a hard-earned authenticity to them. The 63-year-old says it took into her 50s to paint the way she’d always dreamed of painting, and into her 60s to make a living through her creativity. It took learning who she was before she could express herself from that place in her work.

“That’s what people are connecting to, when there’s passion in the work. When it comes from the heart, not the head,” she says. “The older we get, we’re not afraid to really say what’s meaningful. I don’t have to watch what I say so much. I feel stronger in my convictions. If you want to express something, you don’t have a lot of time to express it. Better hurry up and do it.”

What: "Windows on the World," oil paintings and colored pencil drawings by Deb Komitor