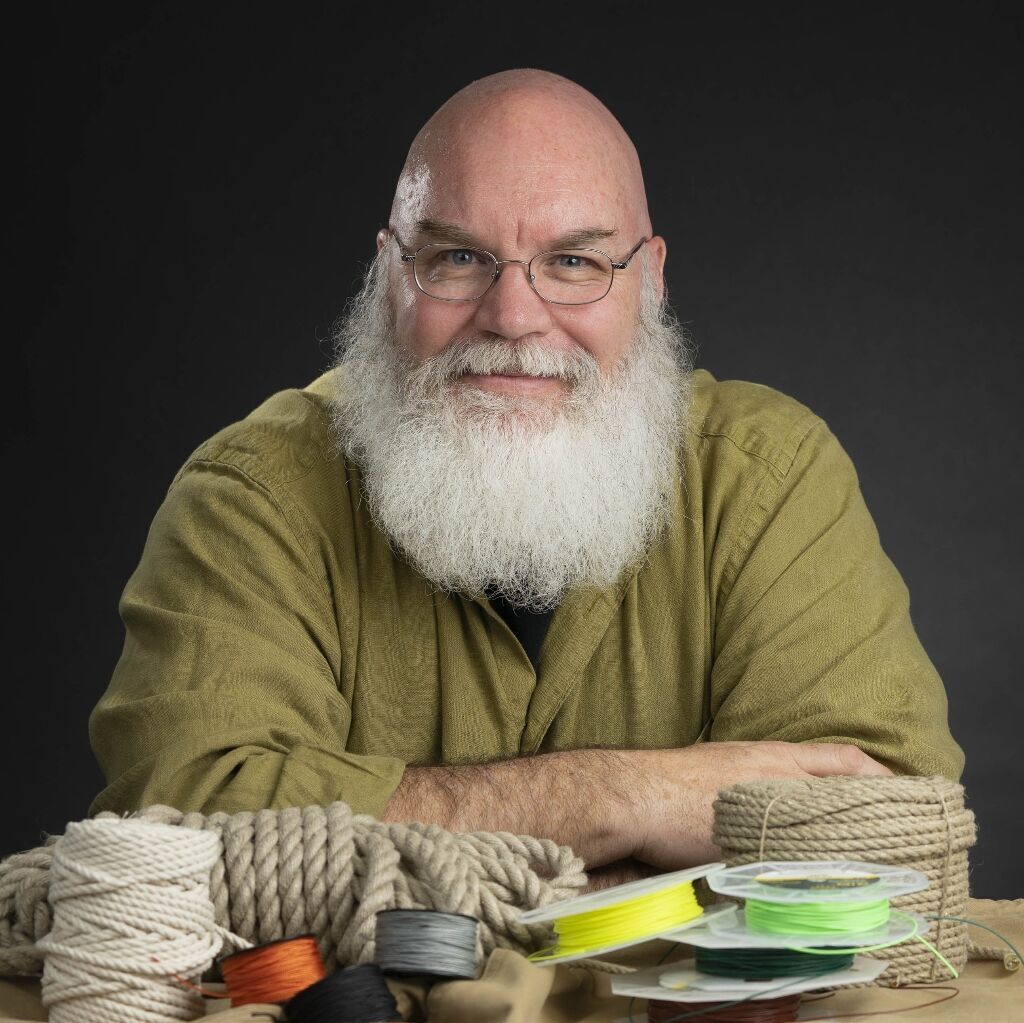 Mark Barsocchini began learning how to tie knots aboard a boat in the San Francisco Bay. 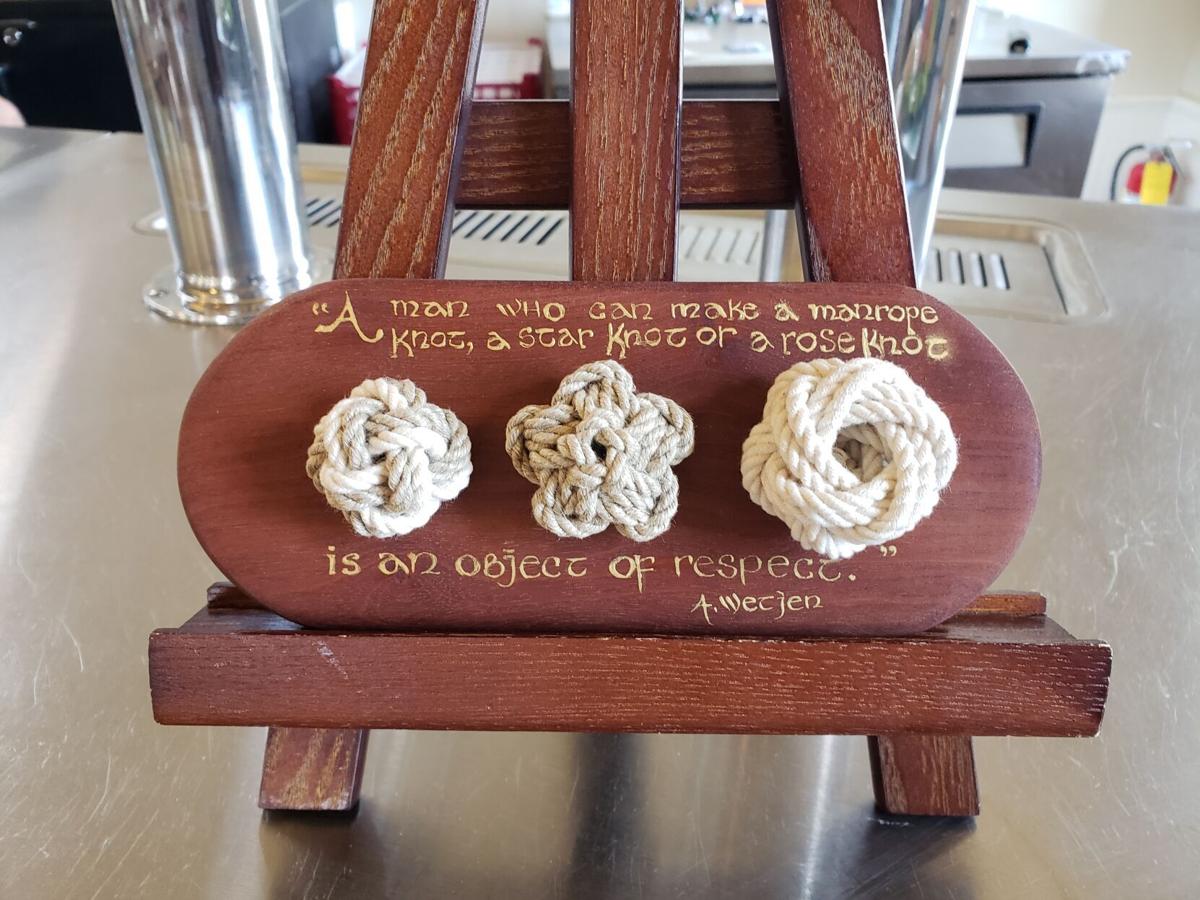 Mark Barsocchini began learning how to tie knots aboard a boat in the San Francisco Bay.

In the scarf draped around somebody’s neck, or the shoelaces we tie every day. He’s entranced by something most of us take for granted.

Sitting in the back room at Eclectic CO., a downtown Colorado Springs boutique that carries handmade items by 60 local artists and vendors, Barsocchini is surrounded by knotwork. There’s a dog leash made from hemp, wall hangings that can also be used as trivets made from recycled climbing rope he gets from Mountain Chalet, and a frame with cut-out windows he picked up at Who Gives a Scrap, a donation-based scrap store. Its windows are filled with simple, classy, three-string cotton knots: a square knot, bowline knot, carrick bend, Chinese button knot, Spanish bowline knot, handcuff knot.

Barsocchini knows his knots. The interest took root in his teenage years, when he lived in San Francisco and joined the Sea Scouts, an organization like the Boy Scouts, but on the water. He went out with his friend on a 56-foot sailboat, and began to learn about knots and all things nautical. But then his parents moved to Arizona, so he lost the thread.

But when his son declared an interest in Tiger Cub Scouts in first grade, his dad went along for the ride. The group was tasked with teaching the boys about knots, and Barsocchini reflected back to his days on the water. He figured he could dredge up the old knowledge and put it to use. He did, and his interest in the hobby was reinvigorated. He bought Clifford Ashley’s “The Ashley Book of Knots,” with its more then 3,900 styles of knots and 7,000 illustrations.

“I thought I’m really enjoying this and keeping my hands busy,” Barsocchini says. “I kept doing it. I didn’t sell anything. It was just for fun. My ex-wife joked if somebody stood still long enough in my house, Mark will tie something to you. You come to my house now and I’ve got knot art on the walls.”

He began to work with paracord before venturing into three-strand manila rope and then hemp rope, which he prefers today. But it didn’t stop there. What else could he tie into knots? That’s when old climbing rope came into play, and then old fly fishing line, which he transformed into cufflinks, and old guitar strings that he wound into perfectly sized rings. You can find his work online at csknotworks.com.

Six things to do in and around Colorado Springs this weekend: Great American Cleanup, Motorless Morning and more

“If I’m sitting I’m tying, because I can’t sit still,” Barsocchini says. “My wife is knitting or crocheting on one end of the couch. I’m on the other end knotting everything, from small stuff to big stuff.”

One of those big things will hopefully include creating two rope walls for a new independent movie theater building in Oklahoma City.

He also doesn’t like to throw things away. That’s the other positive to his handiwork — the recycling part.

“I see people come over and look and gasp, ‘Oh my gosh, look at that,’” he says. “They never realized you could do something with something you were going to throw away. That is satisfying.”

Over the last decades, when he wasn’t manipulating some piece of knot-worthy material, he worked in Denver and the Springs as an IT project manager, before settling in over the past year doing customer service for a software firm that does scheduling for massage therapists.

He’s also managed to develop a great side hustle thanks to his full, snow-white beard — gigs as Santa Claus, of course. He got the job occupying the throne at Chapel Hills Mall in 2019. And last year he was the featured star in Denver’s Parade of Lights.

But really, it’s the knot-tying that’s captured his attention. Wherever he goes, his eyes are drawn to the knots in the room. And if you tie one poorly, well, watch out.

“When I look at people who are tying tags on their product, I look at the price and then I look at the knot they tied,” he says. “Secretly I’m judging them. If you tied an overhand knot, that tag is going to come off by somebody just picking up the product.”