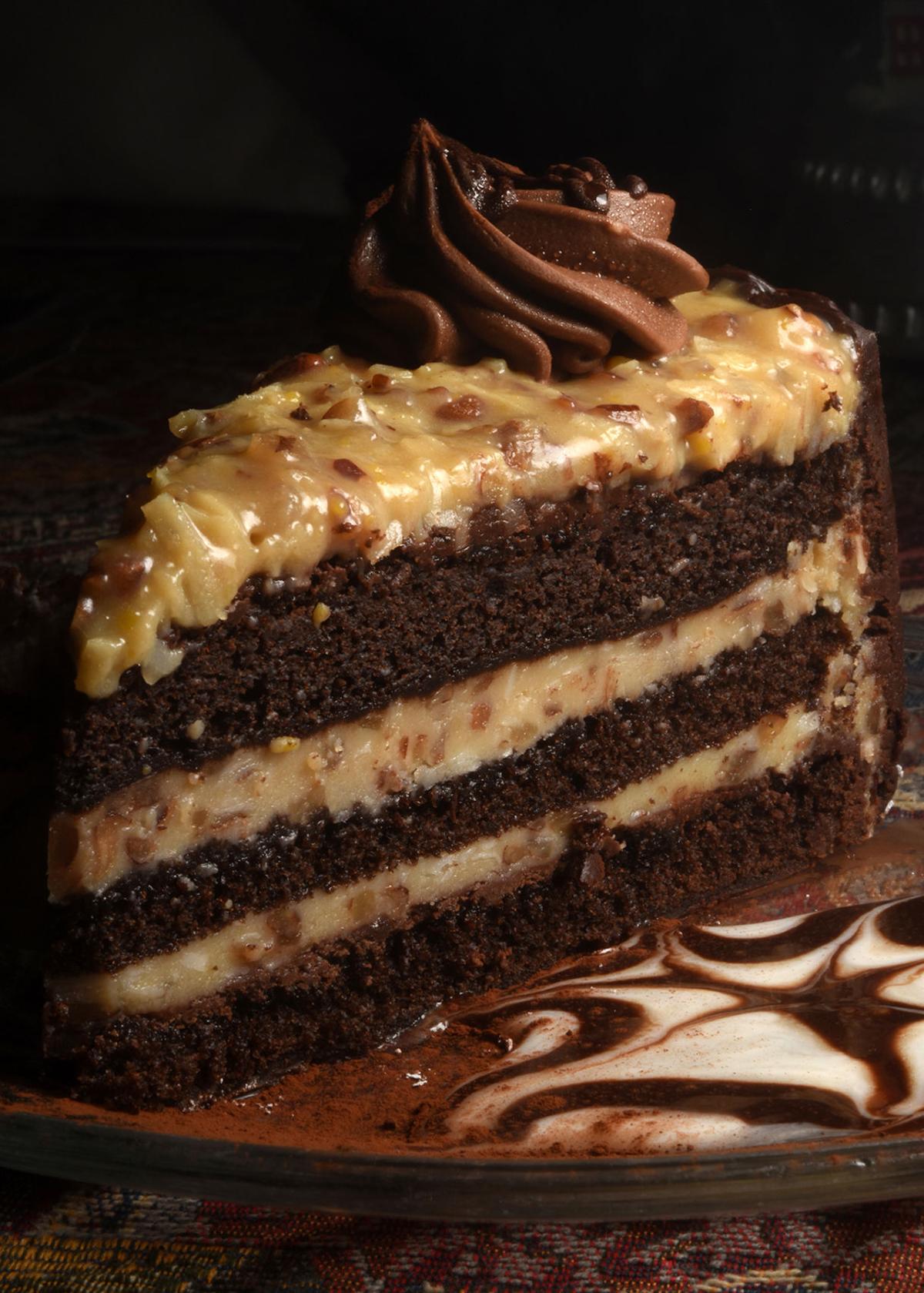 German chocolate cake at Edelweiss Restaurant. The restaurant has a friendly staff and serves traditional German dishes. Its décor is reminiscent of a vintage Bavarian lodge. 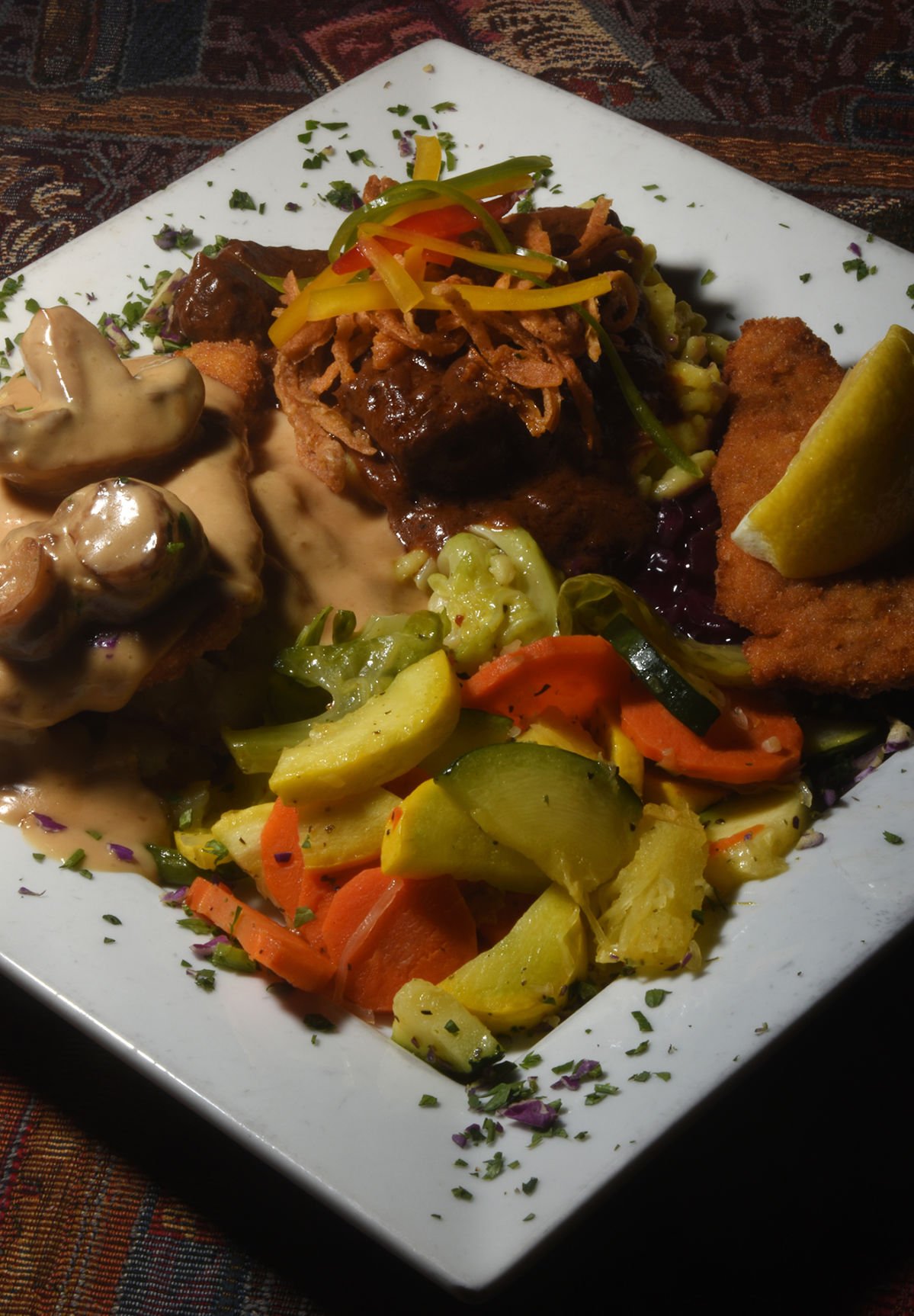 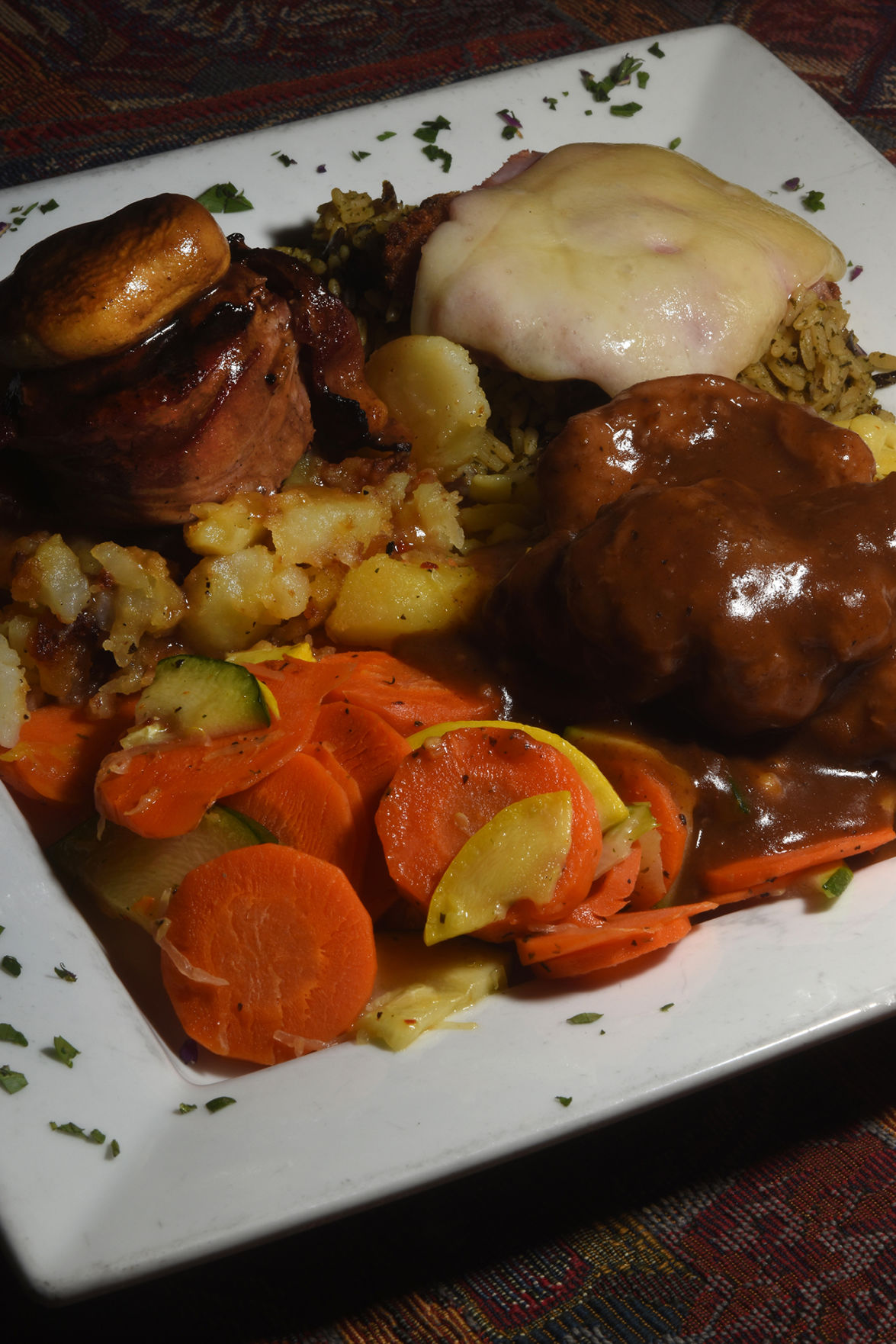 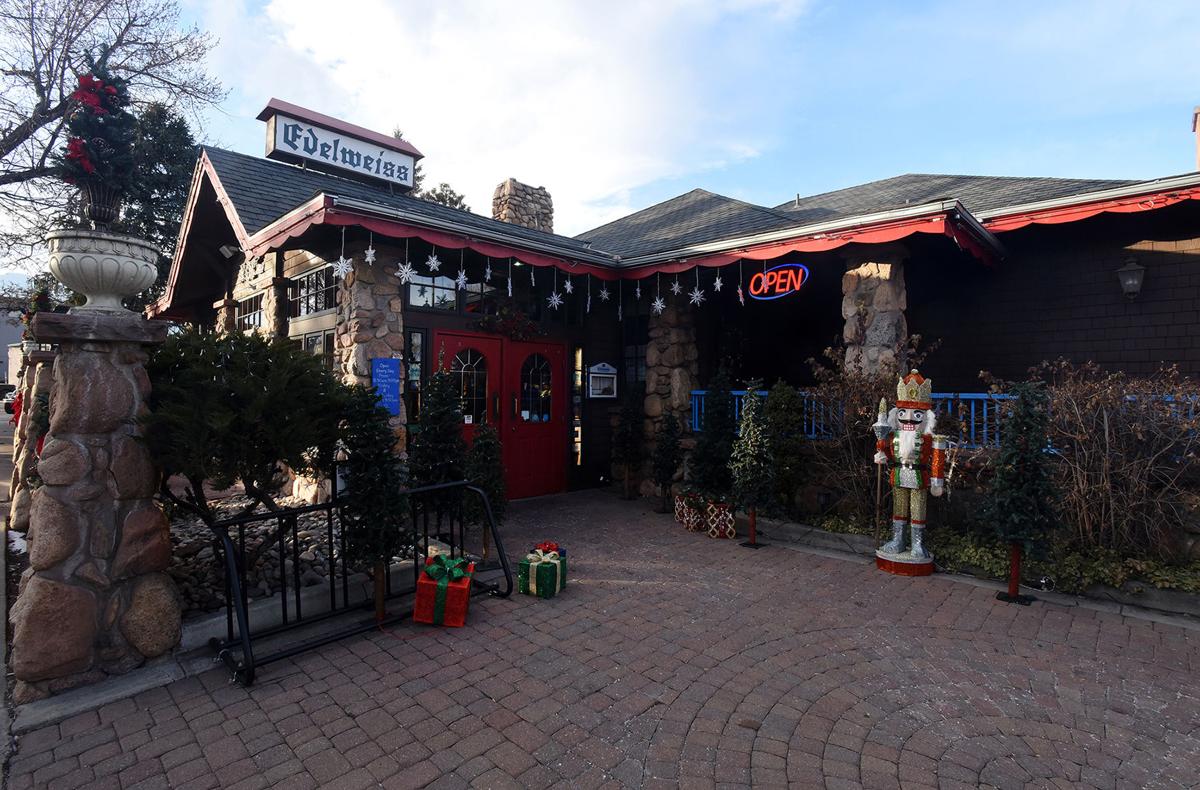 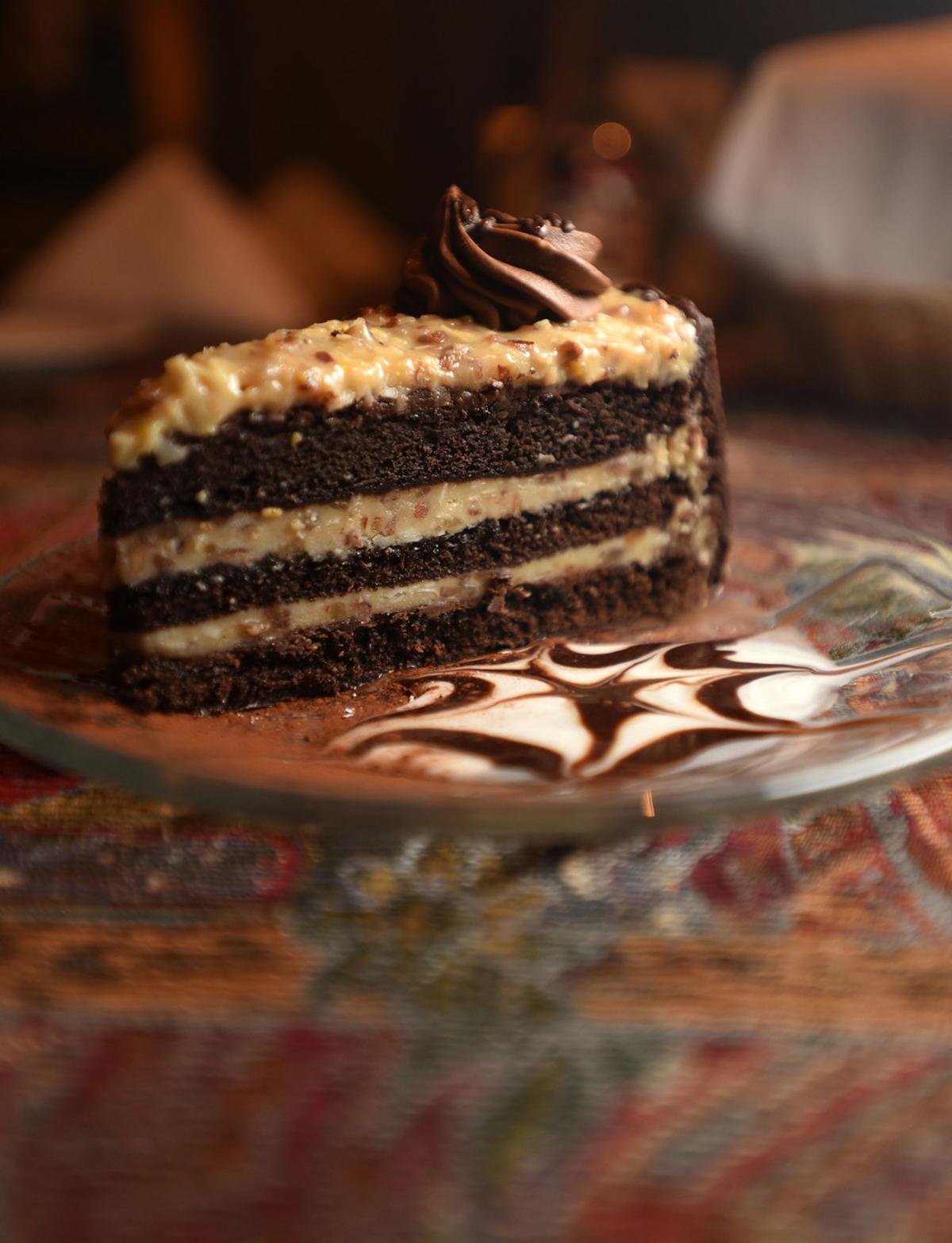 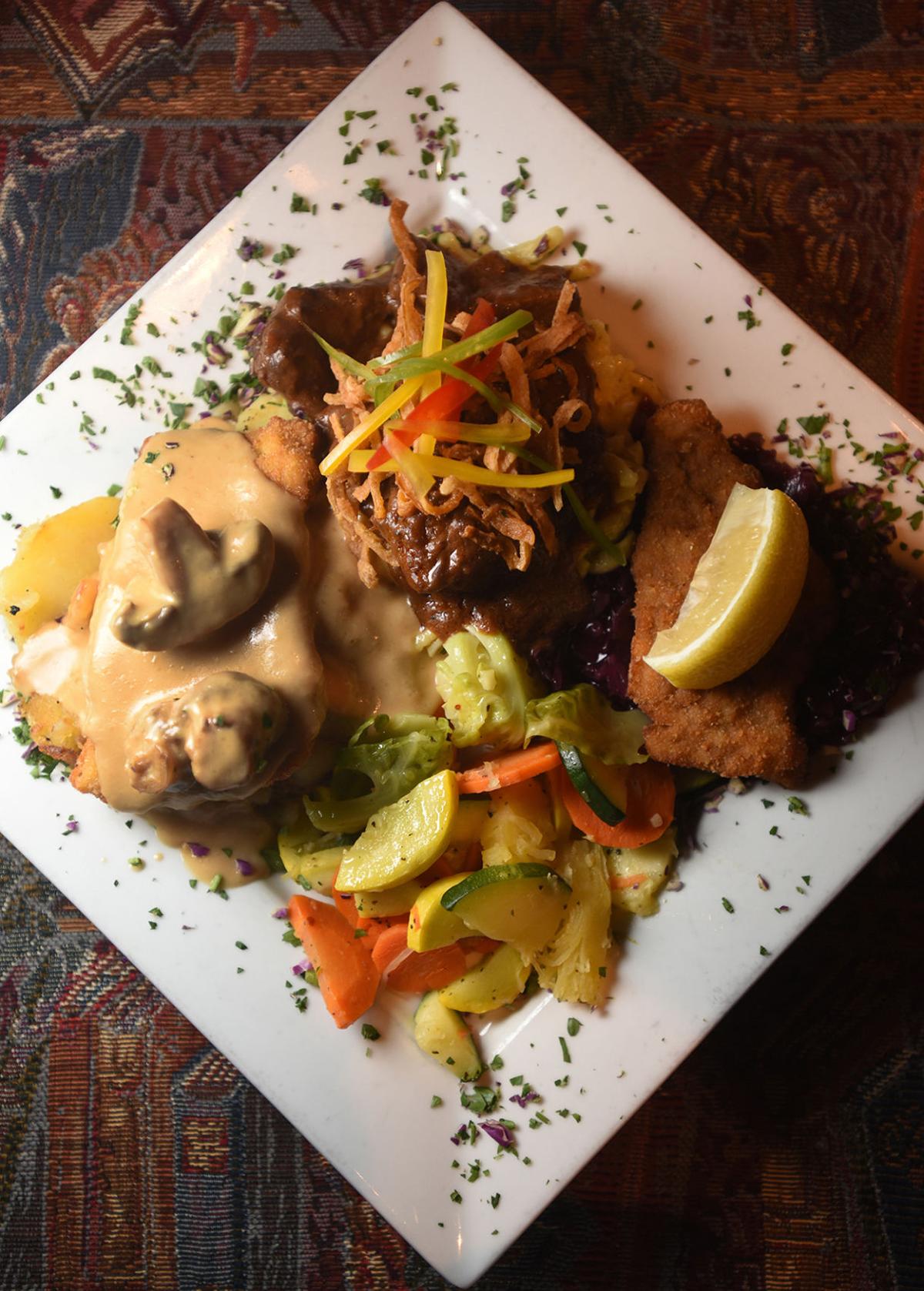 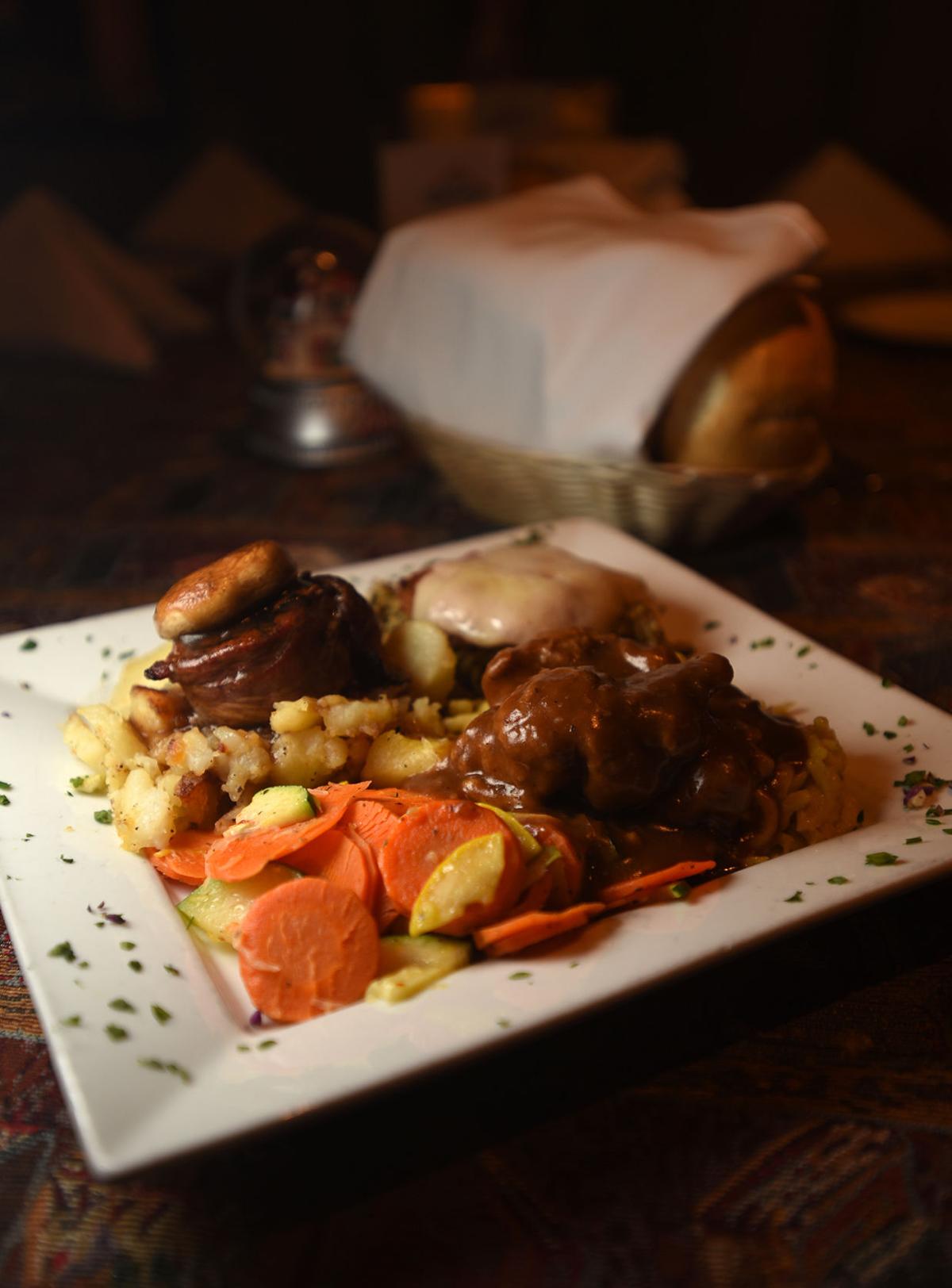 When it comes to the color palette of most German cuisine, danke schoen for red cabbage.

The food at Edelweiss Restaurant in Colorado Springs is no exception. Although more purple than ruby, the cabbage is a literal bright spot among entrees of mostly brown, beige and ecru hues.

Edelweiss is well-established in the community as a go-to venue for German food. This is easily explained by its décor reminiscent of a vintage Bavarian lodge, the friendly staff and the traditional dishes. An additional element of authenticity comes in the form of patrons and many servers speaking German. While all this puts points in the plus column, a few things missed the old Deutsche Mark.

Our initial server was outgoing and friendly and enthusiastically answered our questions. She nodded approval at our selection of the two combination plates, as they would provide the opportunity to sample several items at once. She also noted that the Badische Platte ($23.95) included her favorite, rahmschnitzel: breaded pork with mushroom cream sauce. (Shortly after taking our order, she stopped by to let us know she was being moved to another section,and we would be taken care of by a less exuberant, albeit proficient, server.)

That pork cutlet with mushroom sauce was my top choice, too, after tasting everything else on the plate: veal wienerschnitzel, goulash with spaetzle , fried potatoes, vegetables and, of course, red cabbage. The other combination plate, Edelweiss, featured some of the same sides, except the cabbage was replaced by rice. Veal cordon bleu, jagerschnitzel and filet Madeira completed that entrée.

Except for the filet, wrapped in bacon and unevenly cooked, the meats were breaded and looked much the same. Of course, the wienerschnitzel was not covered in gravy. Instead, as per tradition, lemon wedges are provided to spritz over the top to literally add zest to the veal. This garnered second place in my preferences. As noted, the runaway best of show for me was the rahmschnitzel. It was the most tender, and the dark, creamy brown sauce, thick with button mushrooms, was rich and earthy.

The small sampling of goulash was the least successful. Topped with fried onions and served over the spaetzle, it was difficult to discern much more than a hearty gravy. It didn’t do the short, round egg noodles justice.

A thin slice of ham and not fully melted Swiss cheese were the clues to the cordon bleu. Here a variation on the customary chicken, it was breaded and lightly sautéed veal. Presentation was the issue, since the cheese did not morph from its thin, square shape to something gooey to coat the meat. Otherwise, the flavors were fine.

Entrees come with a salad. This is actually a medley of German potato salad, green beans with vinegar, a tomato wedge, pickled cucumbers and pickled beets. The potato salad and beets were exceptional with their distinctly tart flavors.

A near-rainbow of color is in the many desserts, several featuring vibrant fruit fillings or toppings. The cakes, tortes and strudels are impossible to miss because the display case is on the way to most of the several dining areas. The house-made sweets are difficult to resist.

I admit, sitting by a gas-log fireplace with its mantel adorned in Christmas decorations, I initially felt transported. The linen napkins and tablecloths enhanced the ambiance.

But the plastic, beer stein-like water glasses quickly brought me back to the city’s south side, where I spent the rest of the evening.