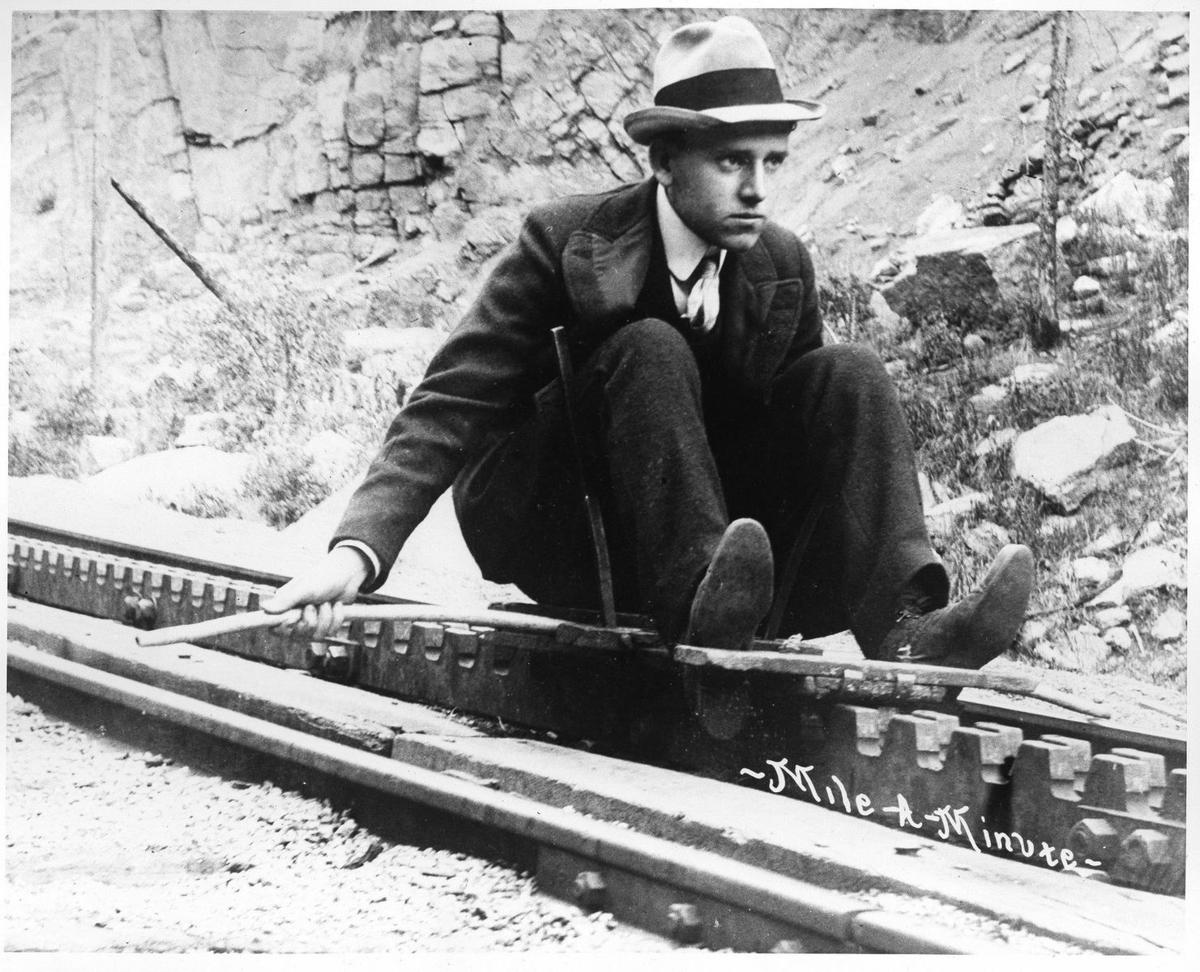 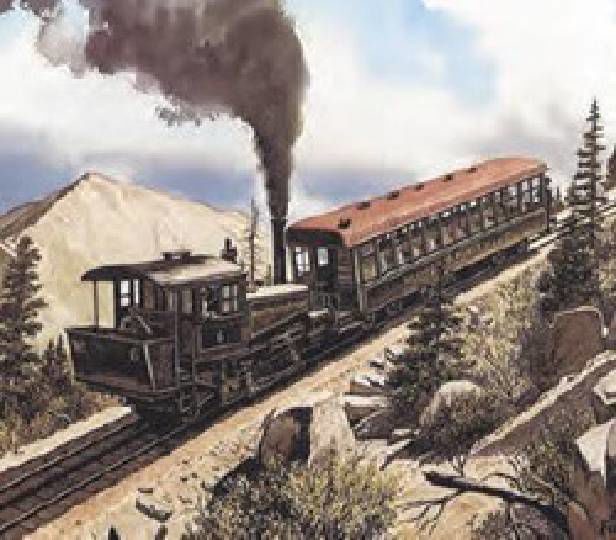 THE GO-DEVIL was supposed to die a long time ago. It was too fast. Too dangerous. You couldn’t control it, couldn’t stop it. It would split a man’s head open as quick as the crack of a whip.

So it was outlawed over a half-century ago. Pictures of it were taken down. The practice was buried under the forgetfulness of decades until the very idea almost vanished.

But the pull on the imagination was too strong. A local guy dredged up the memory of the go-devil from his boyhood and decided it sounded like fun. He built his own, and brought the illicit practice into the modern age.

“I admired the idea of it,” said Bob Porter on a recent afternoon. “To me it just seemed like it could be a heck of a lot of fun.”

Go-devils are handmade skateboard-size sleds designed to fly down the rails of the Pikes Peak Cog Railway. Also called scooters or toboggans, the contraptions have been used, and frowned upon, for as long as the railway has been around.

The scooters are illegal and potentially deadly, but that never seemed to stop a certain brand of person.

“How fast they will go depends entirely on how much guts or foolishness you have,” an early track worker named G.B. Hibbard once said.

A guy once shot the 8.9 miles from summit to Manitou Springs in 11 minutes, according to the late Pikes Peak historian Morris Abbott. Counting time to step over switches in the track, that means he flew down at an average speed of almost 60 mph.

FAST TRACK TO THE GO-DEVIL

The go-devil grew out of necessity.

“The first ones were built by the construction workers,” said Mel McFarland, the Cog Railway’s chief conductor.

When the railroad was built between 1889 and 1891, the crew rode up on the train, but often walked down to town at the end of the day. The men learned they could slide down by balancing their shovels on the center rail and sitting on them, McFarland said.

As time went by, the practice grew more elaborate, until many employees had custom scooters with outriggers to steady them on the outer rails and brakes for slowing down.

The design was probably borrowed from the cog railway’s predecessor on Mount Washington in New Hampshire, which was built 20 years before. There, workers fashioned similar sleds called “slide boards” or “devil’s shingles.”

“They soon became the objects of sport and competition,” said Paul Forbes, a historian of the Mount Washington Railway.

The record time on Mount Washington, as on Pikes Peak, reached a speed of about 60 mph.

On Pikes Peak, the toboggans flourished among folks who worked along the track because a sled ride down was faster than the train.

The family who ran the Halfway House, a tourist hotel 2.5 miles up the track, used a godevil to run errands in town. It was a three-minute ride instead of an hour tramp by burro.

J.G. Hiestand, a Manitou photographer in the 1890s, would shoot pictures of tourists on the train ride up, then zoom down on a go-devil, develop the photos and sell them as people got off the train. (He allegedly held the record speed.)

The longtime section crew worker, G.B. Hibbard, said that when he worked there “every snipe had his personally-built toboggan for business, as well as pleasure. We’d catch the train with our toboggans and ride up to a job for the rest of the day and then all ride home in the evening.”

But people kept dying. A go-devil clicking along down the track could easily hit a raised iron spike and come to a dead stop, shooting the rider through the air in a long, headfirst arc into the rocks. Three riders died over the years on Mount Washington, and slide boards were banned there in 1906.

On Oct. 27, 1911, George De-Walt, a railroad employee, died of a concussion suffered two days before when, according to The Gazette, “He was violently thrown from a toboggan upon which he was riding . . . from the summit of Pikes Peak.”

Unnamed others came close. “You won’t find news on any of it,” chief conductor McFarland said. “The incidents were kept real quiet.”

City employees were finally banned from riding the rails in 1948, McFarland said, after several accidents that summer. And cog workers were threatened with being fired if they rode. The practice stopped.

Over the years, employees who knew how to build a good godevil retired or moved on. Cog Railway management took down pictures of the scooters and hid the few remaining rigs in back storage sheds. They were not mentioned in any tours. The knowledge of this informal, underground tradition was broken. Almost.

Then Bob Porter came along.

On an afternoon in 1981 the Manitou Springs native started fiddling around in his garage with a few secondhand hockey sticks, an old soup can, a swatch of used tire and some other junk.

In his head, he pictured the scooter that a watershed caretaker, who lived halfway up the railway, had shown him as a kid in the 1940s. The avid Pikes Peak hiker had always thought it would be fun to try. Plus, it would save his aging knees on the downhills.

“It didn’t take too long to build. I’d had 40 years to think about how to do it,” he said as he slowly shuffled out to his garage on a recent afternoon.

Today, Porter, a retired optometrist, has thinning white hair, bad knees and a slight tremble in his hands. He was hesitant to talk.

“I just hope no one is dumb enough to try it and get hurt,” he said.

He sat down to rest his knees and tried to remember the last time he’d gone down the rails. Probably the early 1990s. He wasn’t sure.

“Geez, my memory’s getting fuzzy,” he said.

So he called up his “partners in crime,” Elden and June Cornish, and asked them to come over. After Porter built his first scooter, he built another. Then another. Soon he had enough for the trio of scooter scofflaws to take up the Peak.

Sometimes the friends hiked up. Sometimes they rode the train with their rigs stashed in backpacks.

“It was a good moonlight activity,” Porter said with a slight chuckle. “At one point we were doing it almost every weekend.”

The Cornishes arrived toting their 2-year-old grandson. The only living go-devil riders were now all in one room. Porter dug out a projector and a set of meticulously catalogued slides from the scooter days.

“We used to make night runs,” June Cornish said as she bounced her grandson on her lap and the slides of the trio flying down the rails flashed by. “We went top to bottom a couple of times,” Elden Cornish said. He paused and cocked his head to the side. “How’d we see at night?” “I think we had headlamps,” Porter said. “And we never did get caught.” “No, we just had to hide in the rocks a few times,” June said with a laugh.

They never saw anyone else with scooters. They doubt anyone does it now.

“Our kids were never that interested,” Elden said. “No. Our children are much more conservative than us. How does that happen?” June said.

Then she looked at her grandson.

“Don’t tell your mom we’re showing you this.”

Porter was the daredevil of the group. He had a little whippet named Flash who would trot alongside, and on one particularly straight, smooth section, he would hold Flash on his lap and let ’er rip, reaching about 30 mph.

“We never had any accidents,” Porter said. “We were careful though. And if the track was wet, look out.”

When asked what finally stopped them, June laughed. “Old age.”

Now the tradition of the godevil seems poised to die again, or at least go dormant for decades, like it did before they revived it.

NOTE: This story originally ran on July 1, 2007. It has been updated to run with The Gazette's series on Colorado Springs' 150th anniversary.