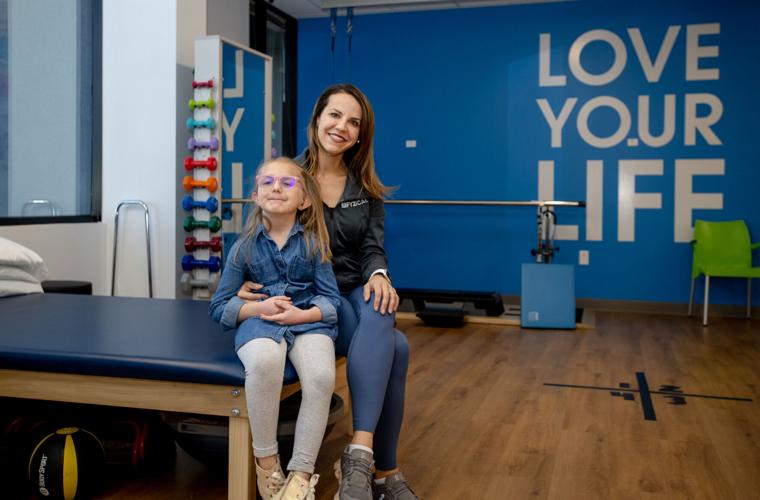 Lindsey Carter and her daughter Lynna at the Fyzical Therapy and Balance Centers’ Rockrimmon office. 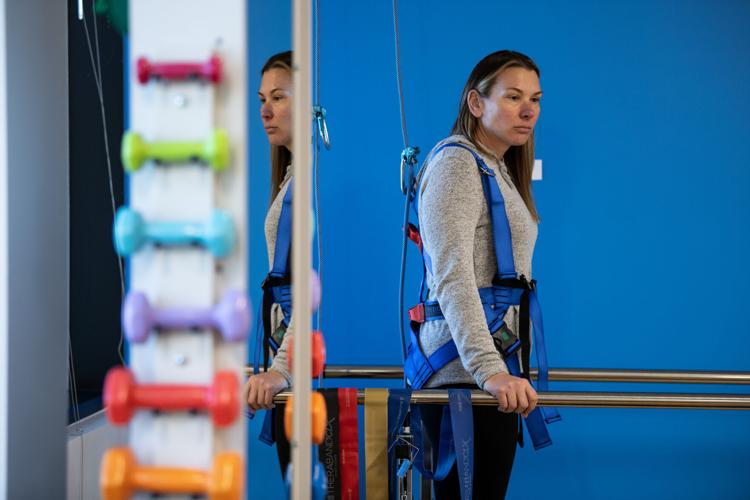 Kate Brown strapped into a harness attached to the ceiling at the Fyzical Therapy and Balance Centers’ Rockrimmon location. 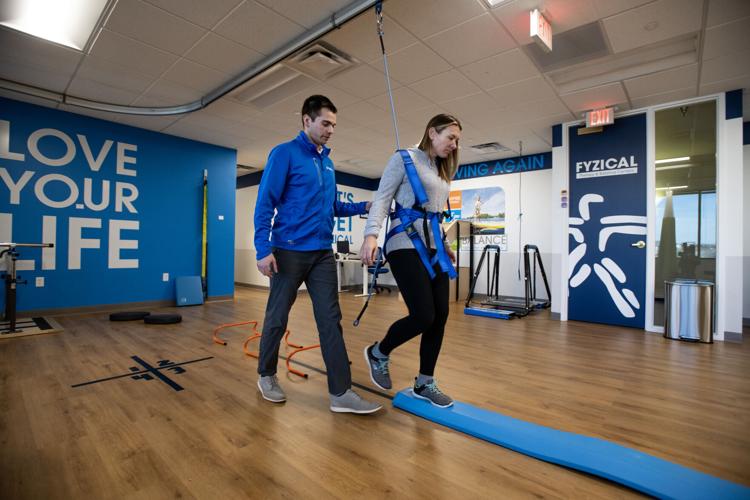 Alex Willis, left, a physical therapist at Fyzical Therapy and Balance Centers, walked next to Kate Brown as she walks over a series of obstacles in the office last week. Fyzical centers have carved out a niche in the balance sector of the profession, and the Rockrimmon location will specialize in vestibular balance therapy and cater to the elderly population, which is most at risk for falls and vertigo.

But shortly after scoring well on the newborn test, she failed a hearing test. And when there’s one birth defect, there are typically more lurking, said her mom, Lindsey Carter. Sure enough, later tests found she had black spots in her vision.

By 9 months old, when some babies are taking their first steps, Lynna couldn’t hold her head up. Genetic testing confirmed she had CHARGE syndrome, a genetic syndrome that results in medical and physical difficulties that present differently in those affected, which is a small number, about one in 10,000 to 15,000 births, according to The CHARGE Syndrome Foundation’s website.

“It’s not common. It doesn’t run in our family,” said Lindsey. “They call it a lightning strike syndrome. We say it gave her super powers.”

Lynna also had a missing vestibular nerve when she was born, which, mixed with some dysplasia where her semicircular canals weren’t properly formed, affected her balance.

“I have hearing loss and I can’t see well,” she said.

Lynna’s syndrome meant hours of physical therapy every week with multiple therapists. At 18 months she was able to sit up, at 2½ she began crawling, and by 4 she had learned to walk. Nowadays 7-year-old Lynna acts very much like a young child, as she runs, bounces and animatedly chats up her mother at the new Rockrimmon location of Fyzical Therapy and Balance Centers. But the hard work isn’t over; Lynna still works to hold onto the physical abilities she has, but to a lesser extent, about seven therapies per week.

“It was a long journey,” Lindsey said.

Those years of hard work and results sparked something in Lindsey and her husband. The physical therapists who helped their daughter became part of their family, she says, and they felt a desire to do the same for others struggling with mobility and balance. So they purchased a Fyzical franchise, bringing the number to seven locations around Colorado Springs, Falcon, Elizabeth and Pueblo. Other Fyzicals also exist in Castle Rock and Denver. The Carters also plan to develop two more locations.

“We really got to see their expertise and fell in love with the field,” Lindsey said. “Fyzical, with their niche toward balance, was a soft spot in our hearts.”

The couple’s location of Fyzical doesn’t offer pediatrics yet, but will specialize in vestibular balance therapy and cater to the elderly population, which is most at risk for falls and vertigo, two things that tend to occur with age. Physical therapists, including clinic director Alex Willis, who specializes in balance, will help patients who have injured themselves in falls and offer preventive care to those who might be at risk of falling. Therapists use equipment to build confidence and strength, including an overhead support system that relies on harnesses to keep patients safe during exercises.

“Having the ability to push people outside their normal comfort zone is the only way to improve balance,” Willis said. “If we don’t do that we become more fragile and we don’t move as much and then lose confidence in our balance.”

To prevent falls and the accompanying medical costs due to injuries, Willis can work with patients on their lifestyle before they get too sedentary and develop a fear of doing what they used to do.

“You go to the dentist to get a checkup,” Willis said. “You don’t always wait until you have a cavity or need a root canal. It’s the same thing with physical therapy. There’s a big area for us to step in and educate and empower people with the knowledge they need to prevent these things long term.”

Lynna’s a good example of what physical therapy can do for a person, Willis said.

“I’ve worked with people who were wheelchair-bound or not getting up from their chair because they could barely walk 10 feet, to getting them to use a walker and a cane and then being on their own two feet,” he said. “People often say losing their independence is one of the worst things about your balance going away, but you can do something about it.”

Willis offers the same advice to everyone: Movement is medicine. Walking, going to the gym and other forms of movement can improve metabolism, reduce or eliminate chronic disease, lower blood pressure and reverse diabetes, he says.

“You can’t do these things with medicine, you can only manage them. You can’t get rid of the cause, you can only treat symptoms,” he said. “With physical therapy you can treat the cause of some of these balance impairments. There are exceptions, but for the most part there’s a way we can help someone. Use us. We’re here to help you.”