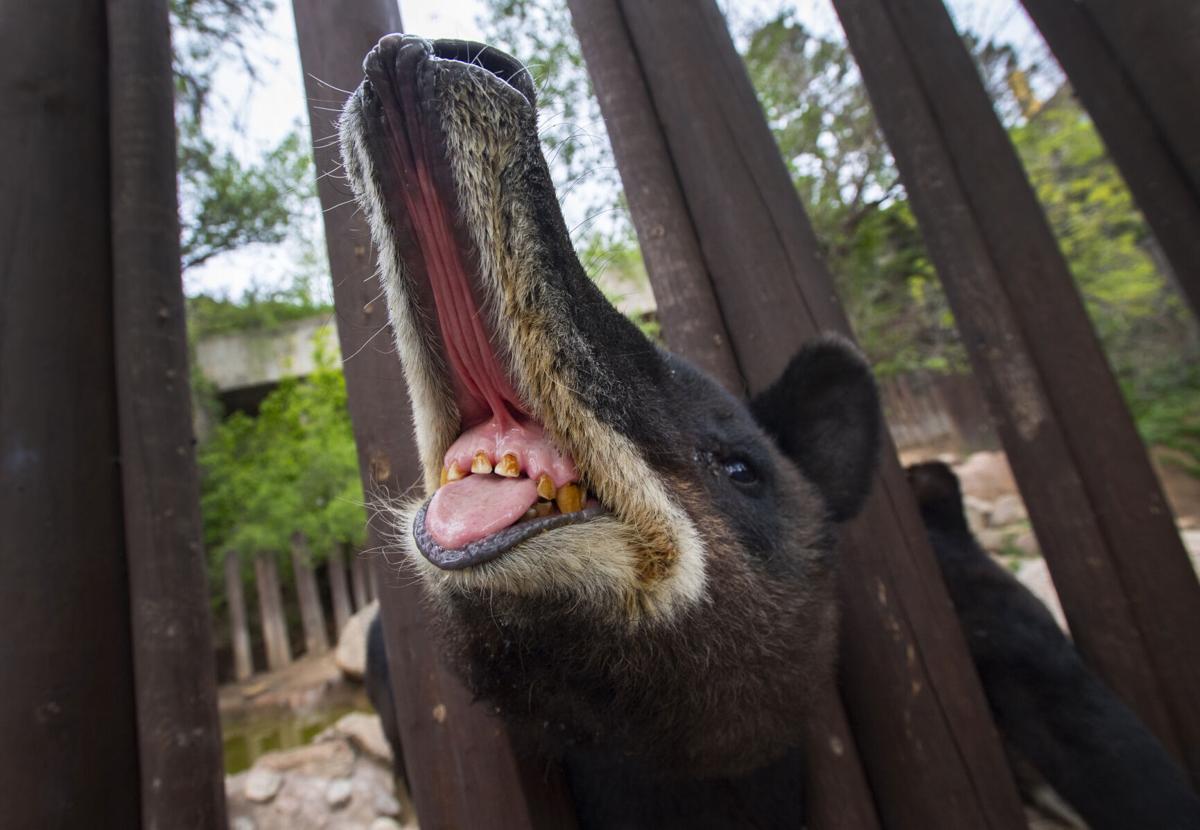 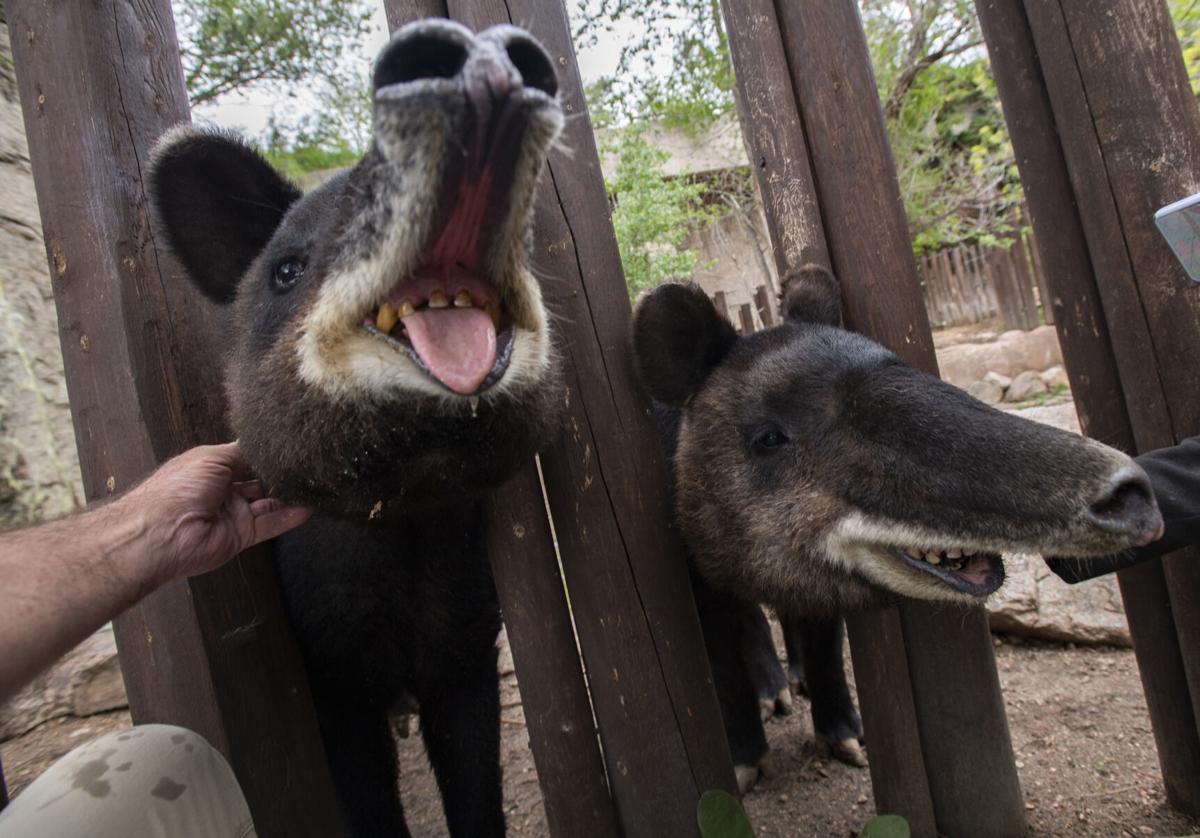 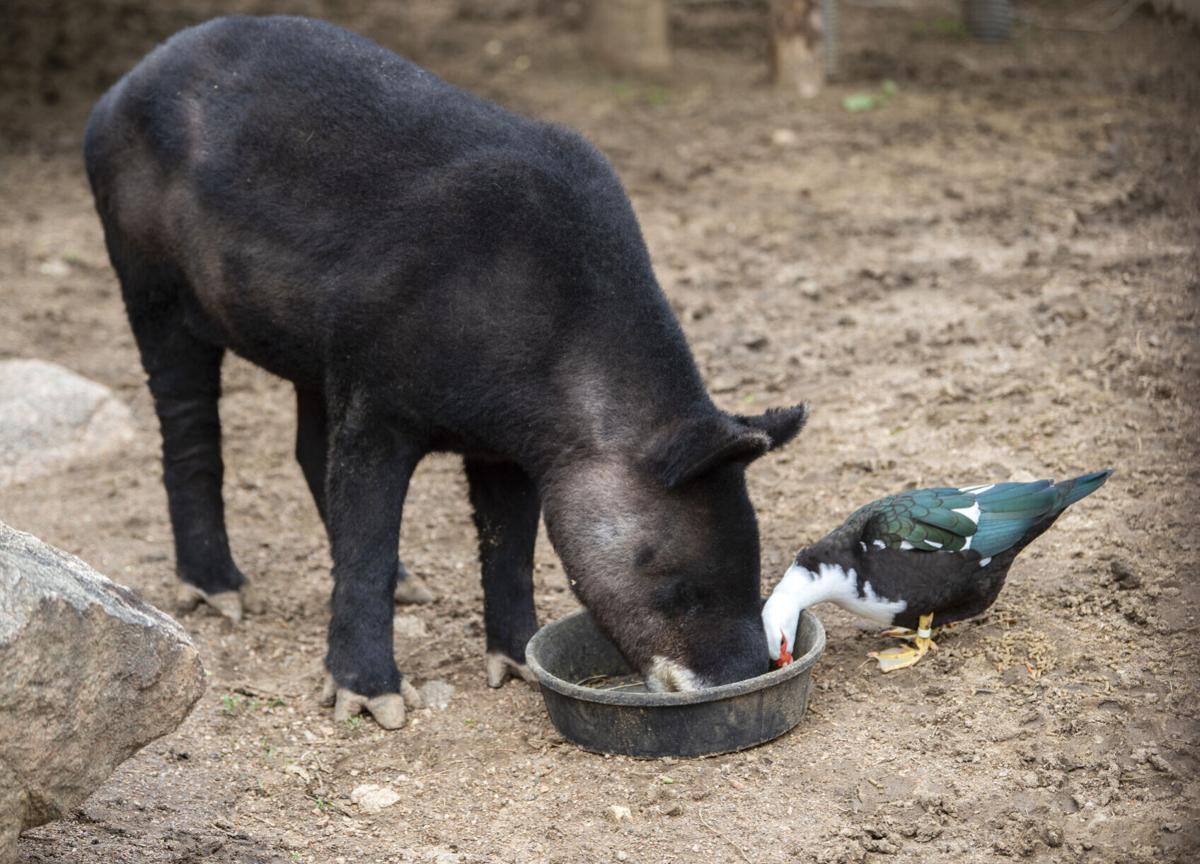 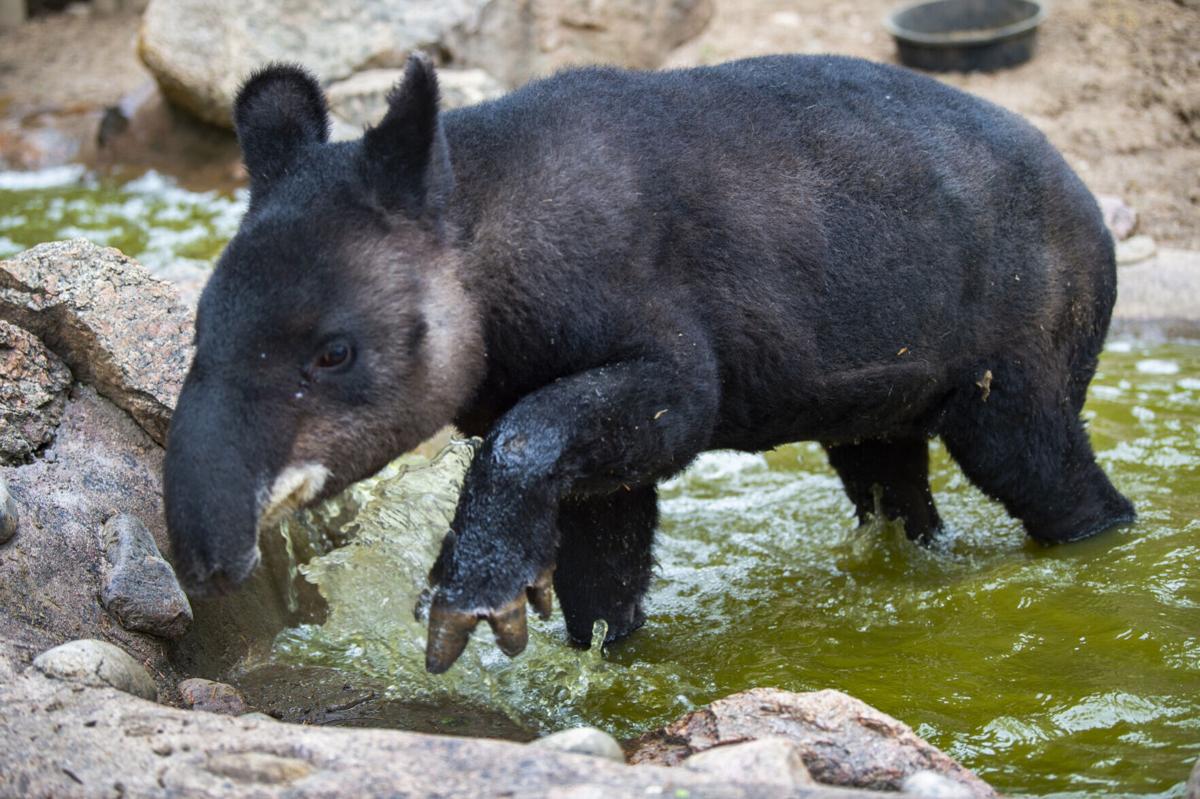 Mountain tapir Cofan, 17, wades through a pond at the Cheyenne Mountain Zoo.

Mountain tapir Cofan, 17, wades through a pond at the Cheyenne Mountain Zoo.

Carlotta and Cofan are the sweet old couple who live down the block.

Only the pair are mountain tapir, and they love to sleep in the mud at Cheyenne Mountain Zoo.

It isn’t often you hear a wild animal called a “love bug.” But the description fits — the 26-year-old and 17-year-old, respectively, tapir are quite possibly the nicest animals living at the zoo. At least, that’s what lead animal keeper Michelle Salido says.

“Carlotta is the sweetest old lady in the whole world,” Salido said. “And he’s (Cofan) a big love bug. He loves the cuddles. He will just stay with us and take scratches until we leave, and then he looks up with that puppy dog gaze wanting more. They’re both the sweetest souls.”

Don’t be fooled, though. If you meet a mountain tapir in real life — which likely won’t happen, as they live high in the mountains of Peru, Ecuador and Colombia — don’t attempt to make them your boo. But this pair of tapir have grown up in human care, which means they could live into their 30s and are very used to humans who love their kind and gentle ways.

Mountain tapir are the latest animal to be featured in a monthly series introducing the creatures at the award-winning zoo.

If a bear and an anteater had a love affair, their offspring might look like a mountain tapir, said the zoo’s public relations and social media manager Rachel Wright. But really, their closest cousin is a horse. They have the coarse, water-resistant fur of a bear and long expressive snout of an anteater. That proboscis is perpetually curious, whether it’s seeking out interesting accoutrements visitors are wearing, or using it to rip leaves off trees and scoop them into their mouths.

“They explore the world through their nose,” Salido said. “It’s a big muscle, similar to an elephant’s trunk. It’s sort of the same way babies stick everything into their mouths to learn. They like to touch everything with their nose to learn.”

How rare are they?

Very. There are only seven mountain tapir in the U.S.: Carlotta and Cofan in Colorado Springs and five more at the Los Angeles Zoo. There are only 2,500 left in their native South American habitat. There’s such a lack of information about the animals that the zoo has, through a membership vote, funded several years of expeditions to Ecuador to work with organizations tracking wild mountain tapir. Salido has traveled several times to help find the animals, take biological samples and put GPS collars on them so researchers can track their movement with satellites and compile data. That information can help decipher where tapir roam and put more protections in place.

Who's who at Cheyenne Mountain Zoo | Tale of 2 grizzlies

Why are they endangered?

It’s mostly due to habitat loss, including pipelining and mining, sometimes even in protected national lands. Cattle farmers also don’t like tapir to wander onto their land, though the tapir generally don’t attack cattle.

Tapir are called the gardeners of the forest. The herbivores adore lettuce, leaves and their favorite snacks: apples and carrots. Because they eat such a wide variety of plant species in the wild and don’t break down the seeds like other animals, they can repopulate those seeds as they move through the forest and germinate what they’ve eaten.

Are they boyfriend and girlfriend?

Kind of. Carlotta has lived at the zoo since 1995. Cofan came to live with her around 2014 as a swap with the Los Angeles Zoo. Cheyenne Mountain Zoo sent their male mountain tapir to L.A. and Cofan came to the Springs as a breeding partner for Carlotta. Unfortunately, she didn’t get pregnant. About four years ago, a reproduction specialist discovered cysts on Carlotta’s ovaries that made it challenging for her to reproduce. That, coupled with her geriatric age, caused the zoo to cease breeding efforts. The pair are the last breeding pair in human care.

And while tapir are solitary creatures in the wild, these two have become best friends. Salido will find them sleeping and curled up around each other when she arrives in the morning.

What will make their whole day?

Nonstop scratches on the tops of their heads and their cheeks. These two would probably stand still for hours while a human visitor gives them some loving. Sometimes the scratches get so pleasurable for Cofan, he has to lie down to take them in properly.