Skip to main content
You have permission to edit this article.
Edit
Just Visiting
Attractions
Calendar
Dining
Arts
Music
1 of 8 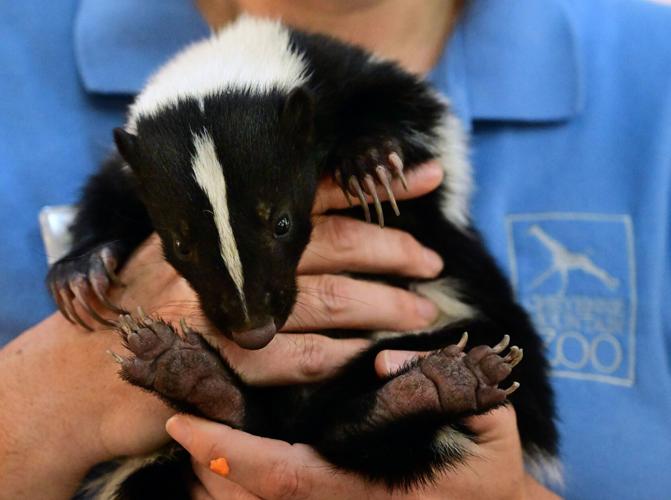 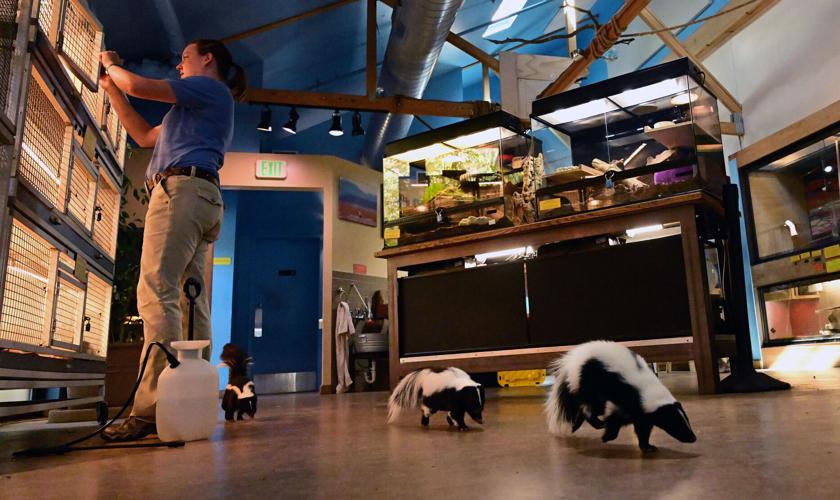 The three young skunks get the run of The Loft sometimes at Cheyenne Mountain Zoo. 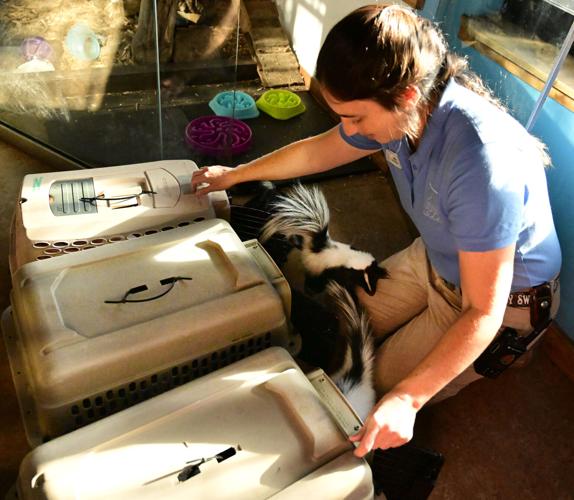 Cheyenne Mountain Zoo Loft Lead Keeper Jennifer Quinn has trained their three 4-month old skunks to go into their carriers before their morning weighings and training on Monday, Oct. 10, 2022. (Photo by Jerilee Bennett, The Gazette). 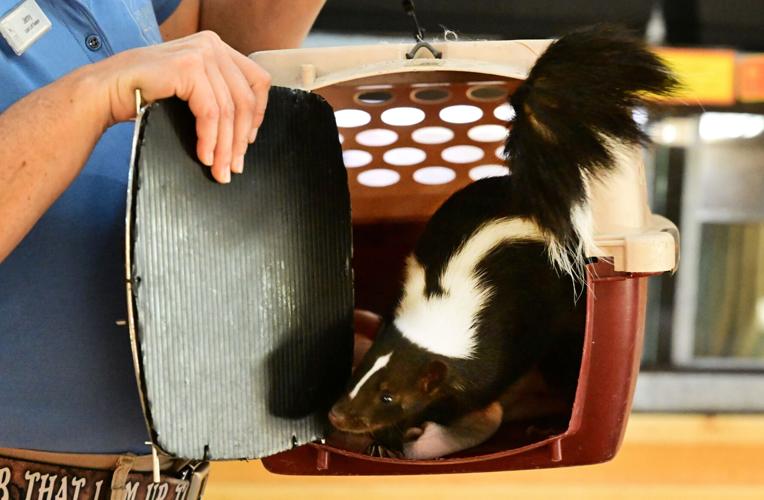 Padfoot the skunk peeks out from his carrier at Cheyenne Mountain Zoo. 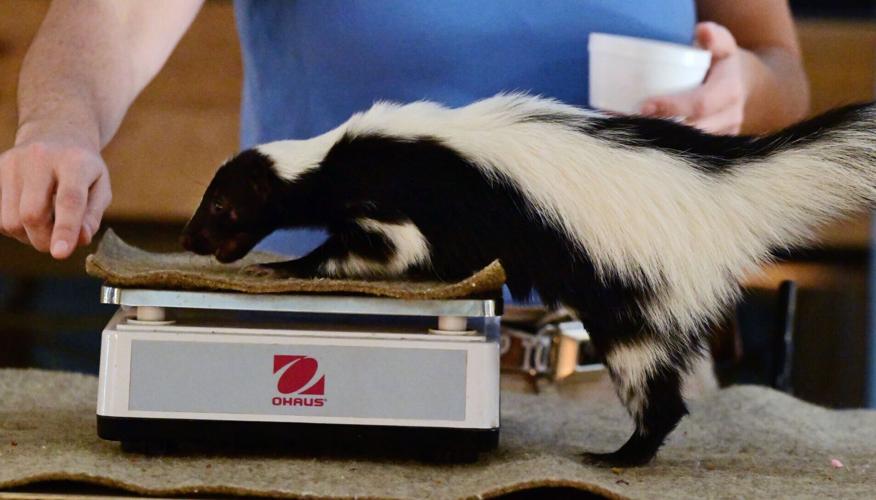 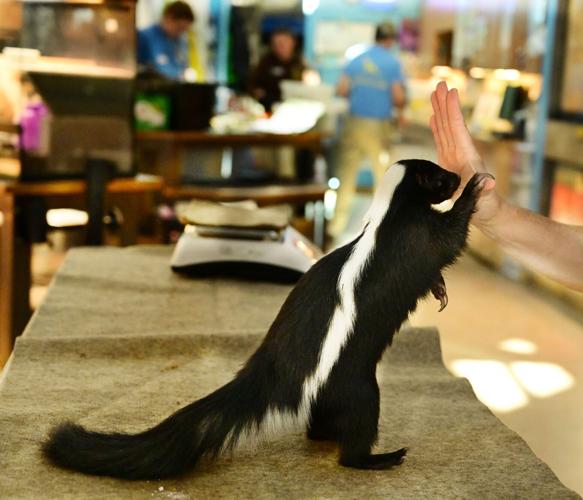 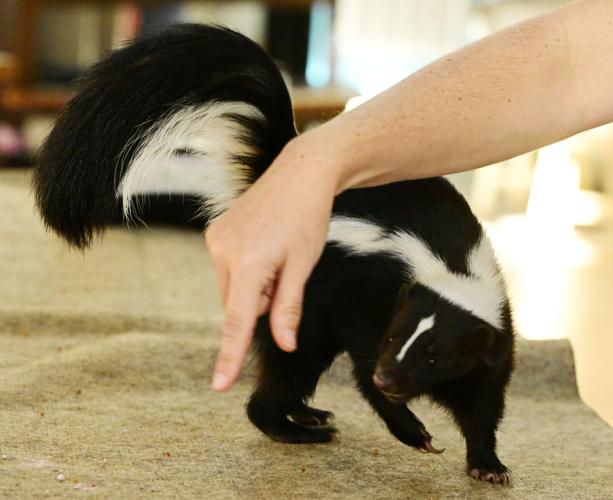 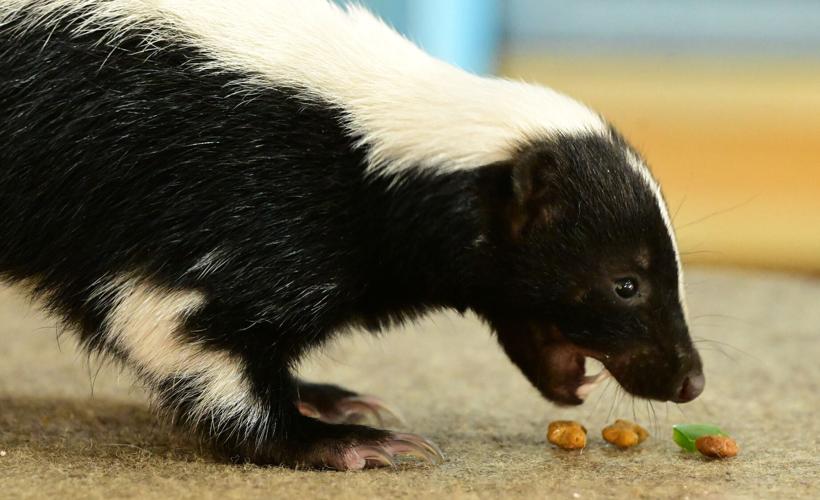 Four-month-old skunks love their treats at the Cheyenne Mountain Zoo on Monday, Oct. 10, 2022. (Photo by Jerilee Bennett, The Gazette).

The three young skunks get the run of The Loft sometimes at Cheyenne Mountain Zoo.

Cheyenne Mountain Zoo Loft Lead Keeper Jennifer Quinn has trained their three 4-month old skunks to go into their carriers before their morning weighings and training on Monday, Oct. 10, 2022. (Photo by Jerilee Bennett, The Gazette).

Padfoot the skunk peeks out from his carrier at Cheyenne Mountain Zoo.

Four-month-old skunks love their treats at the Cheyenne Mountain Zoo on Monday, Oct. 10, 2022. (Photo by Jerilee Bennett, The Gazette).

In the quiet of the morning, before the crowds barge into their sunny mountain home, three 5-month-old skunks frolic and romp.

Digby, Isabel and Padfoot (boy, girl, girl) sniff around the tiled floor in The Loft at Cheyenne Mountain Zoo. With their fluffy white and black tails curled into question marks, the three bide their time waiting under the table where keepers put together meals for the animals in the enclosed space, ever hopeful for the occasional dropped morsel. They’re also big fans of Bean, the two-toed sloth, who snuggles in a rope hammock dangling from the ceiling and is known for regularly having the dropsies with his snacks.

“I love how curious they are,” said Loft lead keeper Jennifer Quinn. “They’re very mischievous. They’ve got to investigate. They’re also relaxed and easygoing animals. They get a really bad reputation, and the more I can change minds and hearts about how cool these animals are the better off they’ll be in the wild, and we can live in harmony.”

The three little nuggets, who arrived at the zoo when they were only 6 to 7 weeks old, came already descented, meaning the gland containing that officious skunk spray had been removed. The skunks have an important role to fulfill: zoo ambassador. They’ll be part of the ZOOMobile, the zoo’s community outreach program that travels to birthday parties, assisted living facilities, schools and more.

“I love that they could care less what the humans are doing around them,” Quinn said. “Like oh, someone built a house here? That’s cool. I’ll just dig under this tool shed and make a home here. Oh, the bugs that used to be here aren’t quite here anymore? Oh look, there’s a veggie patch. They’re so adaptable. They roll with everything.”

But skunks are a terrible nuisance, aren’t they?

Nay and how dare you. Yes, they do love getting into your backyard trash, but only if you’ve been lackadaisical about closing it up tightly, and yes, they will forage your garden for carrots and tulip bulbs, but they can’t help themselves. They’re just so hungry and opportunistic: “I’ve never seen a skunk get full in all my years as a zookeeper,” Quinn said.

But the adorable mammals are also good for your neighborhood. They love to crunch bugs, which helps cut down on diseases spread by said bugs, and also will happily eat whatever they find, such as roadkill, which helps clean up the environment.

But they live and love to spray, right?

Nope. Skunks really don’t want to spray you with their stinky booty juice, and will only do it as a last defense. They have only enough oil in the gland to spray four or five times before it runs out. It takes 10 days to refill, leaving them defenseless for a week and a half in the wild. That means they’ll do everything they can to warn you off before they use it, including stomping their little feet and lifting their tail as a sign of impending doom.

About 95% of animals see the skunk’s distinctive black and white coloring and instinctively know to avoid it, and if they’re oblivious, it usually takes only once to learn the lesson. Dogs, on the other hand, are the exception. For some reason, they haven’t seemed to lodge that factoid in their noggins. The best recipe Quinn has heard for getting the skunk spray off a pooch is baking soda, hydrogen peroxide and dish soap.

A skunk’s spray can travel 10 to 15 feet, and with a good wind, 25 feet. While they can handily mist a crowd of people if they’re feeling fearful, a skunk is a true marksman that can pick a particular wrongdoer out of that same crowd and make a direct hit.

What kind of SAT scores would a skunk churn out?

Likely higher in math than verbal. They’re pretty smart, along the lines of a 1- to 2-year-old, and much like your average dog. Skunks are highly food motivated, so it’s easy to train them. Isabel and Padfoot can do a good approximation of a high-five as long as there’s a delicious treat at the ready.

They’ll eat anything that fits in their face. At the zoo that includes diced fruits and vegetables, pellets of dog food and halved TUMS tablets, which provide their young bones with extra calcium. Their sniffers are top-notch, so much like raccoons, if something smells scrumptious they’re going for it.

If you love skunks and want to help them be respectable members of society, lock up your garbage and don’t leave pet food out.

“They only get into trouble when we accidentally lure them into trouble,” Quinn said. “If we leave them be, they’ll leave us be.”