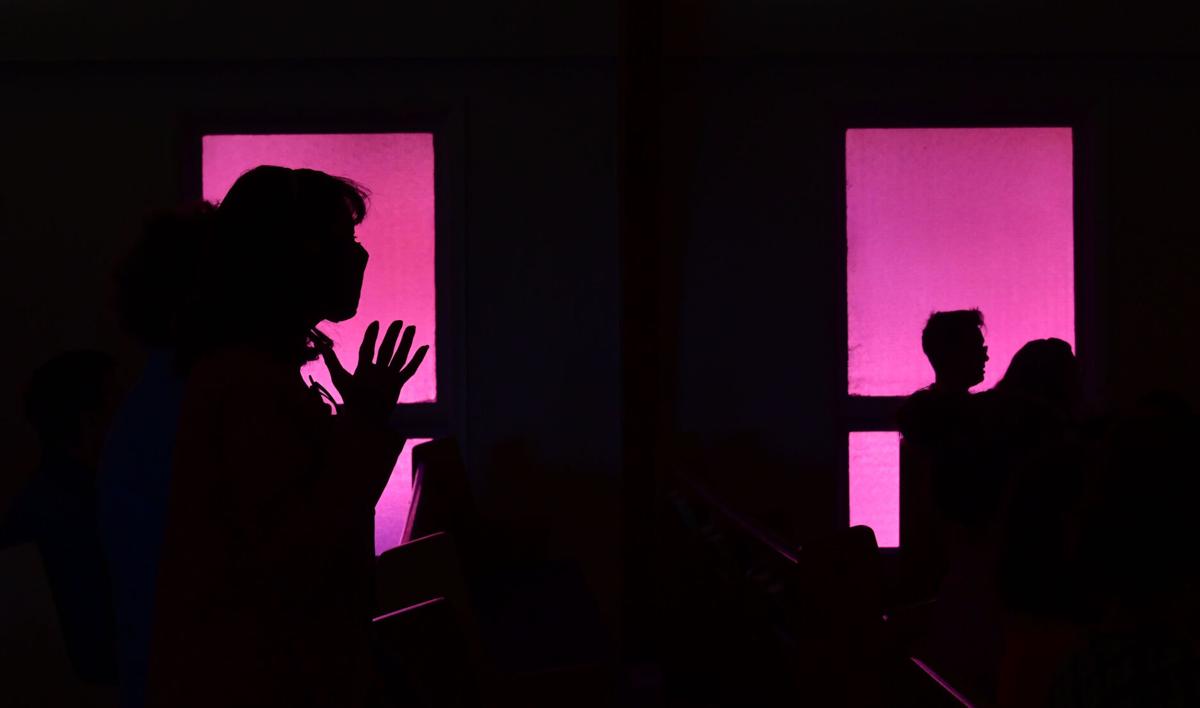 At First Friends Church, the services look like any other Christian church. Jayne Marie Magee is silhouetted against the windows of the church, which are covered with a pink light diffusing panel. 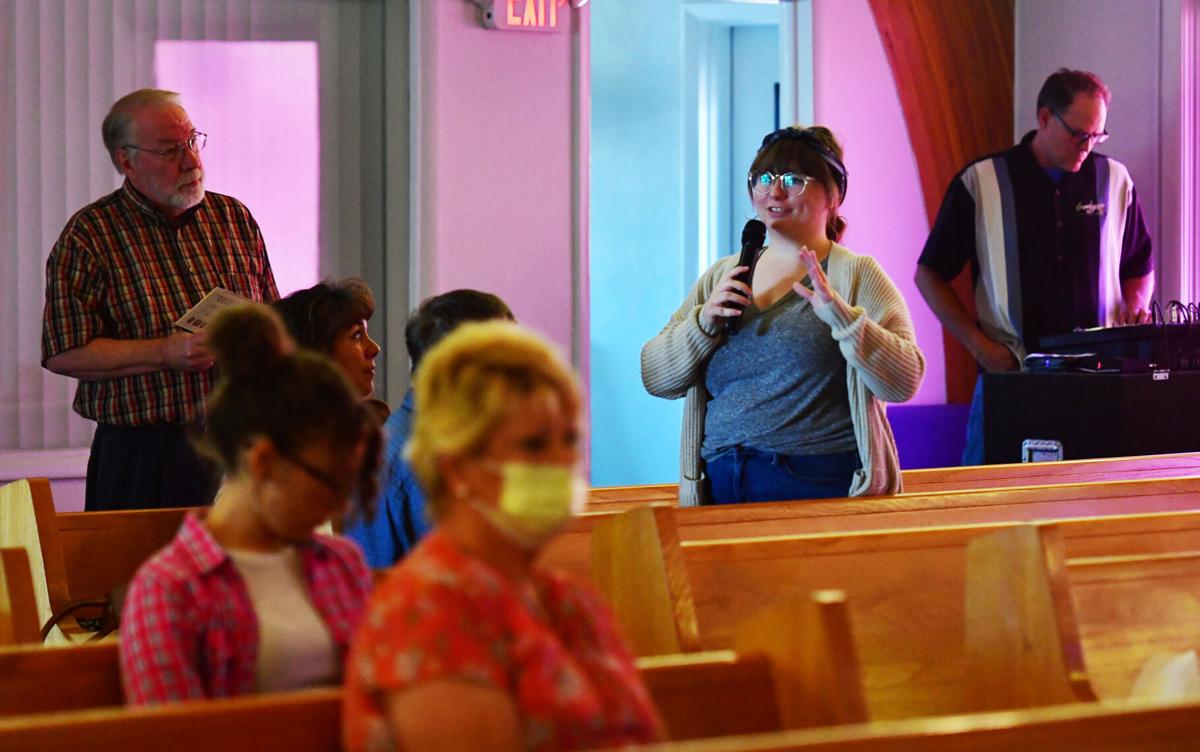 Member Deanna Mieras speaks during a time for praise and prayer at First Friends Church in Colorado Springs. 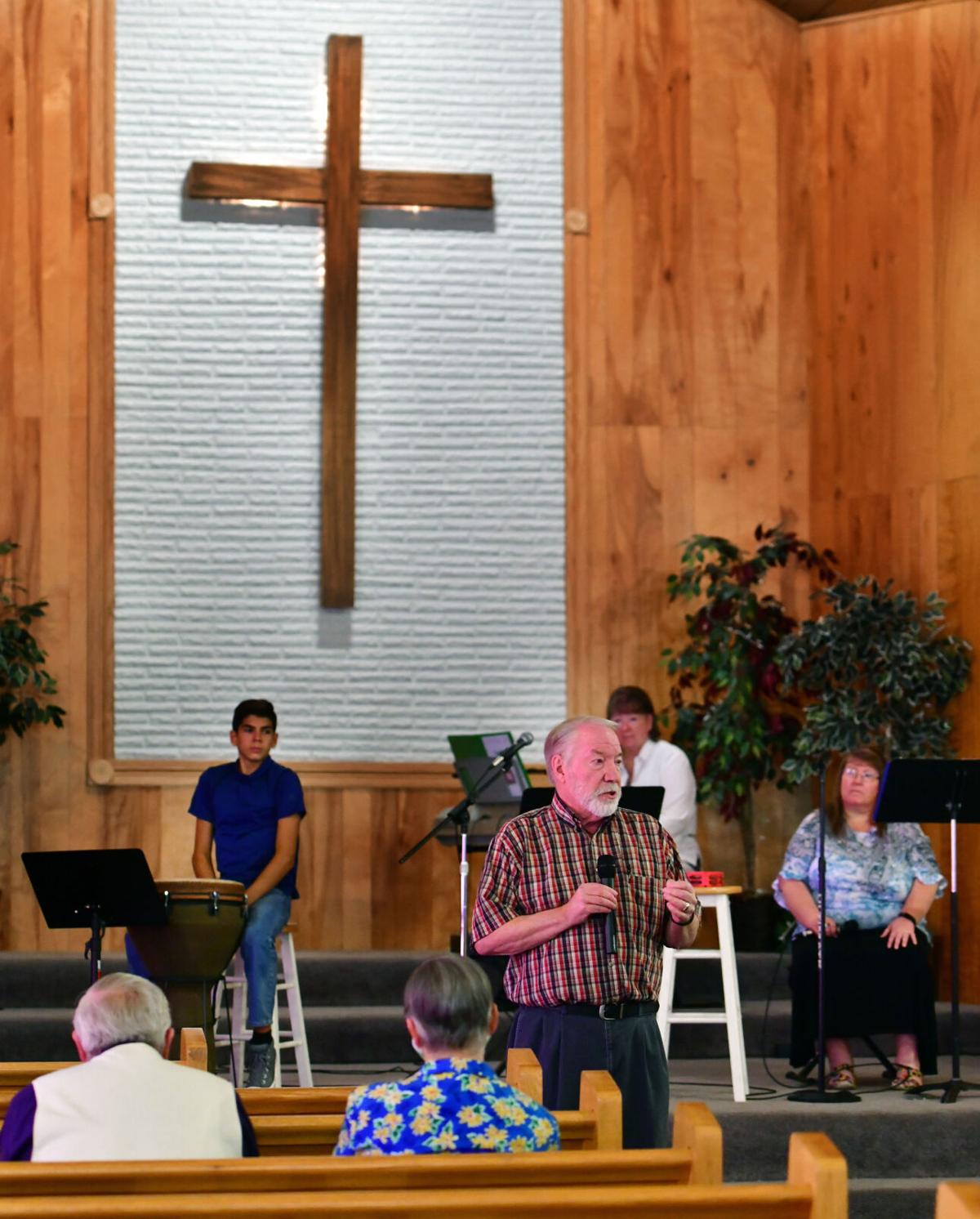 Merle Clowe, administrative pastor at First Friends Church, speaks during a time for praise and prayer. 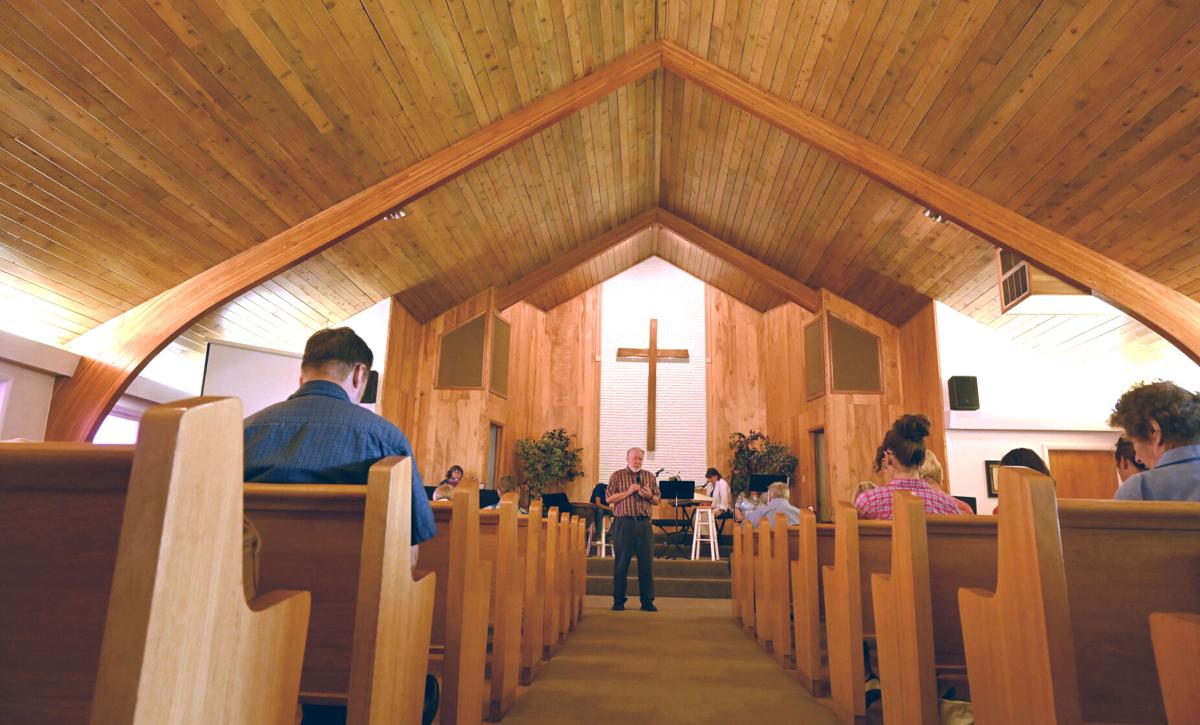 The decor of the sanctuary at the First Friends Church is not ornate, with no stained glass and a simple cross at the back of the church.

At First Friends Church, the services look like any other Christian church. Jayne Marie Magee is silhouetted against the windows of the church, which are covered with a pink light diffusing panel.

Member Deanna Mieras speaks during a time for praise and prayer at First Friends Church in Colorado Springs.

Merle Clowe, administrative pastor at First Friends Church, speaks during a time for praise and prayer.

The decor of the sanctuary at the First Friends Church is not ornate, with no stained glass and a simple cross at the back of the church.

To the uninformed eye, there might appear to be nothing happening at a Quaker meeting. Come Sunday morning, in pre-pandemic times, members and attenders of Colorado Springs Religious Society of Friends gather at their meeting house. There is no liturgy or ritual, no singing, no sermon by a minister. They only sit quietly and wait. And all those who gather are equal.

“We’re all called ministers,” says Deneen Crandell, the group’s presiding clerk. “You’re going in and waiting for God to speak to you. Sometimes he speaks to you about your (stuff) and sometimes he says stand up and say it to everybody. It’s called vocal ministry. I have also sat through many a meeting where it’s totally silent and I’ve done my grocery list.”

Crandell compares knowing whether it’s time to give vocal ministry to being in a social setting and feeling compelled to say something, but fighting the urge. During a Quaker meeting, she asks herself if it’s something that needs to be heard or if it’s only for her.

“Then I put it aside. If it continues, I get up and say it and sit down,” she says. “99.9 percent of the time you speak you have no idea who it’s directed to. Sometimes it’s directed to the whole group or maybe just 1 percent.”

Crandell has experienced the hit of hearing vocal ministry that felt directly aimed at her. Though she was raised Greek Orthodox, the self-described “hippie child” settled into adult life and eschewed organized religion. She believed in God, but she wasn’t religious. When she went through a divorce at 19, a friend convinced her to attend a Quaker meeting.

“I’m looking out the window, thinking about my ex,” she says. “I’m angry with him. We had a 3-month-old. A woman shoots up across the room and says the hardest thing to do is to forgive, but you have to do that before you can move on. I thought wow, maybe there’s something going on here.”

Colorado Springs residents who count themselves as Quakers are few. Crandell lives in Pueblo, but used to drive to the Springs on Sundays when meetings were still in person. Nowadays they meet on Zoom. There are 15 official members, though the Friends also have attenders, or nonmembers. If the latter decides they want to become a member, a clearness committee will be appointed to sit with the person and talk about their decision.

You can also call a clearness committee to discuss other matters. When Crandell moved to Colorado, she worked as a psychologist at the Colorado State Penitentiary. The impending execution of a prisoner posed a moral dilemma for her. Nonviolence is a large part of the Quaker belief system and tradition.

“I was upset,” she remembers. “We talked about how I felt about working at this prison. In the end, I reached clearness that I could work at the prison and still be a Quaker and it would be OK. A clearness committee can help with any decision. Should I buy a house? Or, I’m having a problem with X and how can I solve that?”

Quakers go back to mid-1600s England, when people questioned the church and wanted to explore different ways of practicing Christianity. George Fox emerged as a leader and encouraged people to be guided by a personal relationship with Jesus.

Church conflict during COVID-19 is a growing worry for pastors, report shows

“People gravitated toward it,” says Merle Clowe, administrative pastor at First Friends Church. “They liked the lack of formality and the lack of a regiment that the church and hierarchy was promoting. Quakers have always recognized that it’s your relationship to Christ, not your birthright or membership or not going through a church dogma to be a member, to be a Christian.”

But hold onto your broad-brimmed hat, an accessory many associate with Quakers, for here’s where it gets a little tricky. Through the centuries, the Quaker movement has divided into at least three branches. Other than being connected by history, they have very little in common. Some branches have pastors, a more structured worship and are more Bible-focused in their beliefs than others.

By the way, there was a reason Quakers adopted that particular head gear early on: “In England, they were so hated by the establishment and the Church of England, that when they walked down the street people would dump garbage on them from second-story windows,” Clowe says.

First Friends Church, which averages about 80 to 90 members, is a different branch of Quakers than Colorado Springs Religious Society of Friends. The former is an evangelical group that operates closer to the origins, doctrine and intent of Fox. They believe the Bible is inspired by God and Jesus is the only way of salvation, much like other denominations. What differs from other similar denominations is some of their practices, such as sitting in silence.

Colorado Springs Religious Society of Friends is more liberal in their understanding of God and life. They don’t recognize Jesus as the only way of salvation. They’re seekers.

“My relationship with God is mine. It’s personal,” says Crandell. “I can’t tell you how to worship God, what he or she is. In our current meeting we have a woman who is a Buddhist minister priest, and she is a Quaker. When I was in Albuquerque, we had a nuclear physicist who didn’t believe in God and was an active member of meeting. It’s not like you have to profess a dogma in order to belong. You have to be willing to search with everybody, that’s all.”

A Sunday morning service at First Friends Church resembles more of a typical church service. They sing hymns and spiritual choruses and listen to two or three pastors who rotate preaching responsibilities each week. There are some similarities between the two groups; they both spend time sitting in silence and waiting for God’s spirit to speak.

“If the Lord brings a message to my heart and I feel he’s leading me to share it with the group, I’ll stand and share that message,” Clowe says. “It’s more spirit-driven than human-driven. We do prepare and plan, but also are sensitive to the Lord’s leading.”

Many think Quakers and Amish are one and the same. They are not, though both groups are “peace churches,” according to the website fgcquaker.org, and both have favored simple dress in their histories. Most Quakers no longer practice “plain dress,” though they do still try to maintain simple values in their appearance.

“My daughter used to call us people in comfortable shoes. We tend to dress pretty sensibly,” Crandell says. “If I wear high heels, it’s not because I wear them for me. I’m wearing them to impress another group of people. High heels are not comfortable or practical. I don’t know if I’ve ever seen any Quakers in high heels.”

The basic tenet of Quakerism is “there is that of God in everyone,” Crandell says.

“Your task as a Quaker is to walk cheerfully on the face of the Earth looking for God in everyone.”

That being said, Quaker branches do differ in terms of how liberal or conservative they are, based on who makes up church membership, says Crandell, who has experienced both and landed in a space that’s more compatible with her views.

“I’ve been a rebel most of my life,” she says. “A staid church service where you have to believe certain ways or get pushed out or God won’t talk to you doesn’t appeal to me.”

First Friends Church is active in social issues, but Clowe says there is never an intention to protest or become radicalized or controversial. A few years ago, they put together a policy that recognized a man and a woman as their take on marriage and sexual relations, as prescribed by scripture and history.

They’ve also recently discussed racial issues. Clowe says the church values the human soul regardless of race or color. Not only did Quakers came to America for religious freedom in the 1600s to 1700s, but they also came to take up issue with slavery, women’s rights and mental institutions.

“We’re trying to continue that trajectory,” Clowe says. “It’s not about being brown, Black, white or yellow. It’s about being a child of God and reaching you that way, regardless of whether you were a slave or owned slaves.”