A new 400-seat auditorium, which will house a 100-foot wide by 68-foot tall screen, is under construction at the Icon Cinemas movie theater complex on Colorado Springs’ far north side. Icon’s owners say the mega screen will be the largest in Colorado and will help create a “wow factor” for moviegoers that they can’t get at home or in a typical theater.

Arizona-based RoadHouse Cinemas is remodeling a portion of a former Kmart store, at Nevada Avenue and Fillmore Street in Colorado Springs, into an eight-screen movie theater complex with auditoriums that will seat 48 to 120 people. RoadHouse, which has locations in Scottsdale and Tucson, specializes in a dine-in, movie theater experience; moviegoers can order and be served restaurant-quality food while they sit in full recliners and watch a film. 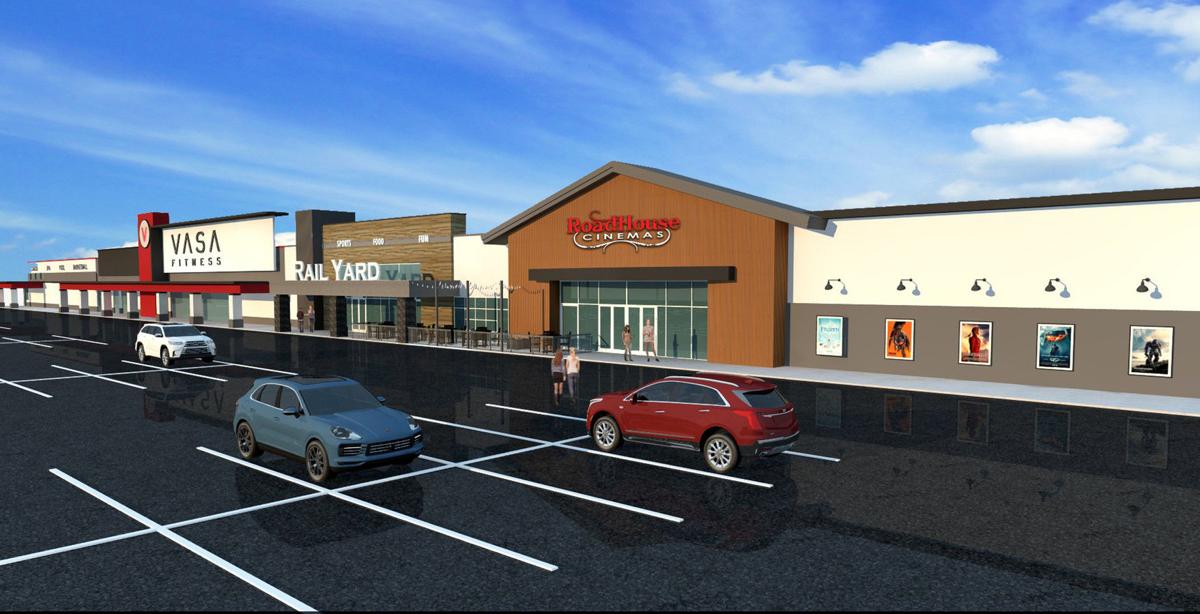 A rendering shows the new RoadHouse Cinemas, an eight-screen movie theater complex that will be built inside a portion of a former Kmart store northwest of Nevada Avenue and Fillmore Street in Colorado Springs. In addition to the movie theaters, RoadHouse is developing the next door RailYard entertainment center that will house games and bowling. 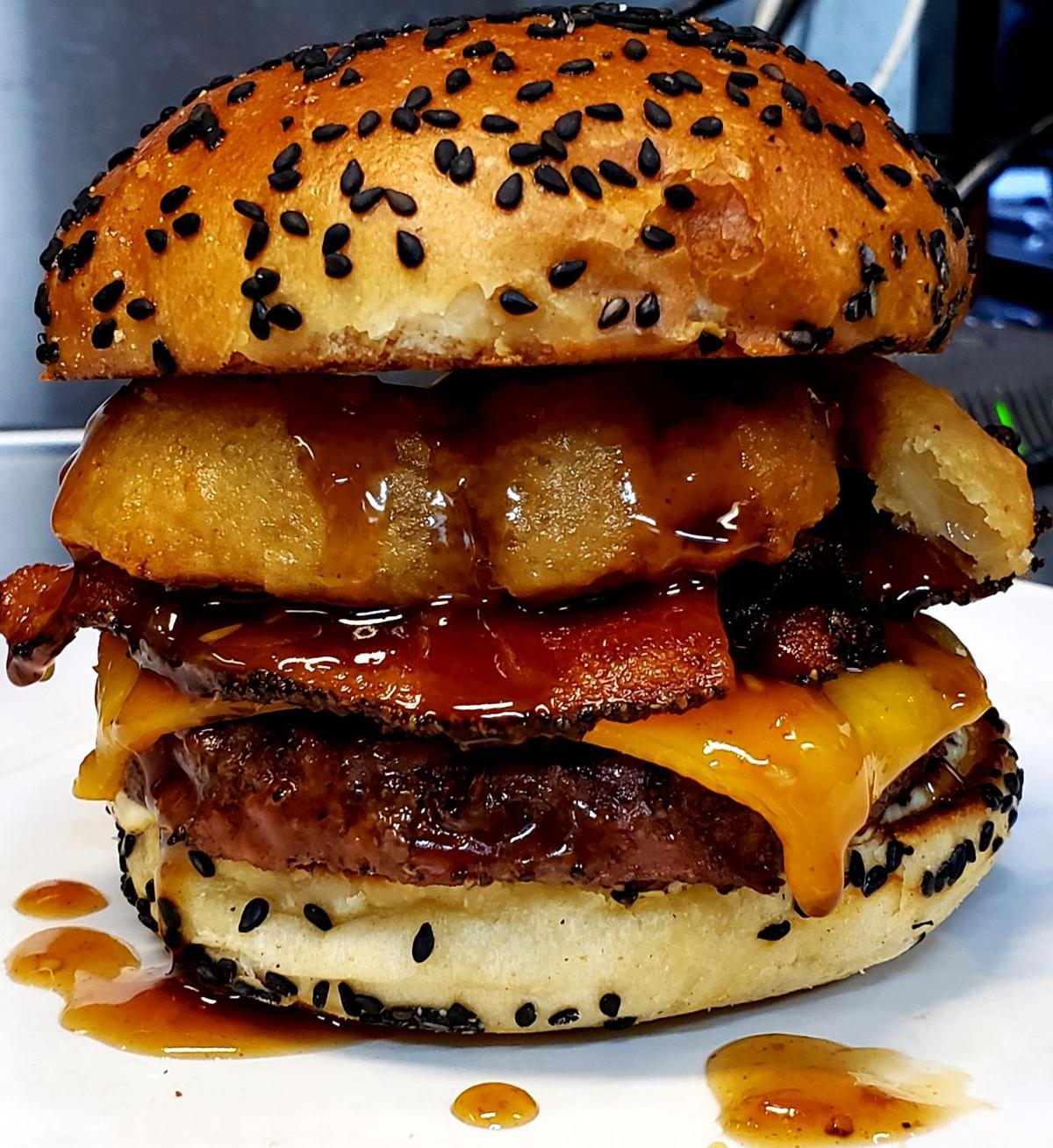 The Bourbon Burger — made with certified Angus beef, hickory smoked cheddar cheese and whiskey onion rings, among other toppings — was a recent menu item at RoadHouse Cinemas’ two locations in Arizona. It’s the type of food that moviegoers can order when RoadHouse opens a movie theater complex next year in a former Kmart at Nevada Avenue and Fillmore Street in north central Colorado Springs. 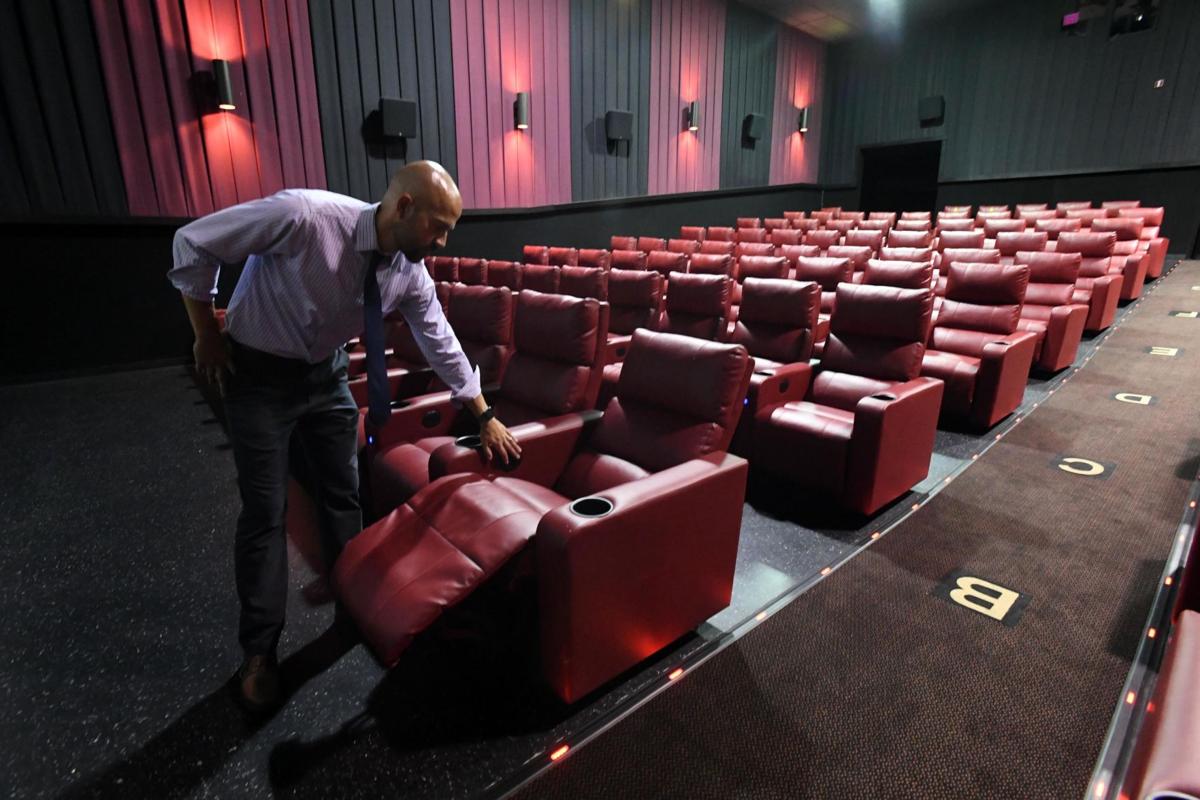 The Picture Show have upgraded their facilities and is now a first-run theater with luxury recliners. General manager Josh Dlugolecki demonstrates one of the new leather recliners.

An architect's rendering shows a new 15th screen to be built on the east end of the Icon Cinemas movie theater complex in the Victory Ridge development, southeast of InterQuest and Voyager parkways on Colorado Springs' far north side. The new 100-foot wide and 68-foot tall screen will be the state's largest, Icon's owners say.

A new 400-seat auditorium, which will house a 100-foot wide by 68-foot tall screen, is under construction at the Icon Cinemas movie theater complex on Colorado Springs’ far north side. Icon’s owners say the mega screen will be the largest in Colorado and will help create a “wow factor” for moviegoers that they can’t get at home or in a typical theater.

The Bourbon Burger — made with certified Angus beef, hickory smoked cheddar cheese and whiskey onion rings, among other toppings — was a recent menu item at RoadHouse Cinemas’ two locations in Arizona. It’s the type of food that moviegoers can order when RoadHouse opens a movie theater complex next year in a former Kmart at Nevada Avenue and Fillmore Street in north central Colorado Springs.

The Picture Show have upgraded their facilities and is now a first-run theater with luxury recliners. General manager Josh Dlugolecki demonstrates one of the new leather recliners.

When the RoadHouse Cinemas complex opens next year in central Colorado Springs, moviegoers can nosh on homemade pretzels, craft burgers made with certified Angus beef, fresh salads, gourmet popcorn and other menu items — ordered from luxury recliners and served to them as they enjoy a film.

On the city's north side, the 14-screen Icon Cinemas theater complex that opened in 2017 is adding a 15th auditorium with a 100-foot-wide, 68-foot-tall screen that will be the largest in Colorado and maybe the nation, its owner says.

Recently, the Picture Show complex on the city's east side rebranded itself as a first-run venue with larger screens, new luxury recliners and a broader concessions menu that includes Angus burgers, beef hot dogs, fries, pizza and soda machines with unlimited drink options.

The goal is to create a let's-get-out-of-the-house experience for moviegoers who want to see first-run films and the latest blockbusters while setting themselves apart from their competitors, say some theater owners and operators.

"If you put yourself in the guest's shoes, or somebody who's coming to the theater, you just ask them what they would rather have, and that’s how we really try and drive what we offer our guests," said Scott Cassell, director of operations for Arizona-based RoadHouse Cinemas, which has venues in Scottsdale and Tucson.

"We have found that the theaters we have now, guests of all ages really enjoy the seat-side (food) service, especially the people 35 and over," Cassell said. "You get to a certain age and you demand more quality and a higher level of service. … That absolutely does help us stand out from the competition."

"That's why these premium, large-format screens kind of came about in the first place," Snell said. "It's just to give somebody such an experience that they could never replicate at home and traditionally could never even be replicated in a typical movie theater."

Snell and Cassell said their complexes are competing with other theater chains — the Cinemarks, AMCs and Regals of the world, which have upgraded their venues with new seating and food options.

"Everybody is coming in and trying to make the experience unique," Snell said. "That's what we're doing here by offering super premium large formats."

Streaming services such as Netflix, Hulu and Amazon Prime Video, which have become popular for homeowners in recent years, aren't the reason theaters are offering new features amenities, Cassell and Snell insist.

Since the launch of streaming services, Cassell said, RoadHouse hasn't seen a decline in business.

Movie industry figures, however, suggest that streaming services are having an effect on theaters.

Figures posted by Box Office Mojo, an online industry resource, show that total domestic movie theater tickets sold during 2018 rose to 1.3 billion, up from 1.23 billion in 2017. Despite that good news, ticket sales in 2017 had fallen to a 25-year low even as there were more movies available to see on many more screens around the country.

"Streaming services have come along with such attractively priced entertainment that theaters can’t compete, except on a handful of event movies that people absolutely must see," Aronson said in the Times story.

Kimball Bayles, the owner of Kimball's Peak Three Theater in downtown Colorado Springs and who's marking his 25th anniversary in business this year, said there's no doubt that streaming services are hurting business for movie theaters and it's why they're responding with new features.

"That's why you're seeing theaters go to all these amenities," Bayles said. "They're trying to figure out some way to attract people off their couches."

RoadHouse Cinemas is remodeling a portion of a former Kmart store, northwest of Nevada Avenue and Fillmore Street, into an eight-screen complex with auditoriums that will seat 48 to 120 people. RoadHouse, which said it prefers to be in secondary markets when it announced last year it was coming to town, is targeting an April opening for its Springs complex.

Every theater has its own niche, Cassell said, and RoadHouse wants to take moviegoing comfort to another level with its dine-in food offerings. While some Gazette readers have said the dine-in concept was offered by at least one movie theater in the 1980s, Cassell said he expects RoadHouse's service to be a present-day first in the city.

Before the start of a film or while it's playing, moviegoers can press a button to receive seat-side food service — ordering off a restaurant menu that will include made-to-order burgers, sandwiches, pizza, all-you-can-eat popcorn and gelato and other desserts, among other items. Colorado craft beers and wine will be available from a full-service bar.

Food prepared at an on-site kitchen will be brought to moviegoers, who can enjoy it while leaning back in their seats. Need ketchup or mustard for your burger? They're available along with salt, pepper and napkins from condiment trays installed in between every two seats.

In addition to its theaters, RoadHouse will have a next-door entertainment center, called the RailYard, with  duckpin bowling, arcade and virtual reality games, food, a sports bar and patio.

While part of the theater complex, the entertainment center will have its own entrance — allowing both moviegoers and customers who aren’t taking in a film to play the latest arcade, virtual reality and other games.

At the Icon Cinemas, the new mega screen will be the centerpiece of a massive, 400-seat auditorium — more than three times bigger than Icon's largest current seating venue, Snell said. Moviegoers will watch films shown on a state-of-the-art 4K laser projection system and listen as a 50-speaker, 3D sound system carries sound all around the auditorium, he said.

The new auditorium is under construction on the east side of Icon's existing theaters, which are part of the Victory Ridge mixed-use development southeast of InterQuest and Voyager parkways. The venues will be linked via a corridor, and the new theater will have its own lobby and washrooms.

Icon hopes to complete the theater in time for the new "Stars Wars" film that's being released in December, Snell said. Ticket prices for the theater will be $2 more for adults and $1 more for children and seniors — a "small upcharge" that Snell said is less than what many theaters charge for a premium, large-format screen.

"Just this one auditorium has basically three screens combined into one screen, with three times the seat count and three times the speakers," he said. "It's just going to blow people away. ... There's nothing like being in a packed auditorium, there being 400 people in the room experiencing the same awesome movie with you."

While Icon wants to create the "wow factor" for its moviegoers, Snell added that the city's north side growth also was a major factor in adding the new auditorium.

The InterQuest area is booming with rooftops, apartments, restaurants, hotels and other entertainment concepts; Victory Ridge, where Icon operates, will be home to In-N-Out Burger's distribution and production facilities and its first Colorado restaurant, expected to open in late 2020.

"We believe in the growth of that side of town and everything that's going there," Snell said.

As he watches Icon's expansion, the arrival of RoadHouse and the upgrades that have been made by Cinemark and others, Bayles, of Kimball's Peak Three Theater, said he offers his own kind of experience for moviegoers.

Many of his customers enjoy a nice evening out — eating at a downtown restaurant before strolling over to his theaters just east of Pikes Peak Avenue and Tejon Street. Kimball's Peak Three specializes in smaller movies and independent films; Bayles said he doesn't play movies that are targeted for young people, much to the chagrin of his teenage daughter.

"I think we stay alive because we're downtown, and we’re kind of a 'take your wife out, go to dinner, get some food'," Bayles said. "Kind of a downtown experience."

His theaters years ago upgraded to digital projectors and state-of-the-art sound, and moviegoers can buy tickets in advance on the Kimball's Peak Three website, just as they can at the multiscreen complexes.

He also doesn't have giant screens or the type of food increasingly found at large complexes — although he does have popcorn and says he was the first to offer liquor, beer and wine when he obtained a liquor license 23 years ago.

"Do you want to watch the movie or do you want to eat? Which is it?" Bayles said. "It's really difficult to watch film when you've got people walking in front of you and taking orders and little lights at the table. I think it's good to sit there in the darkness and enjoy the movie, myself. And I think most of our clientele would agree."