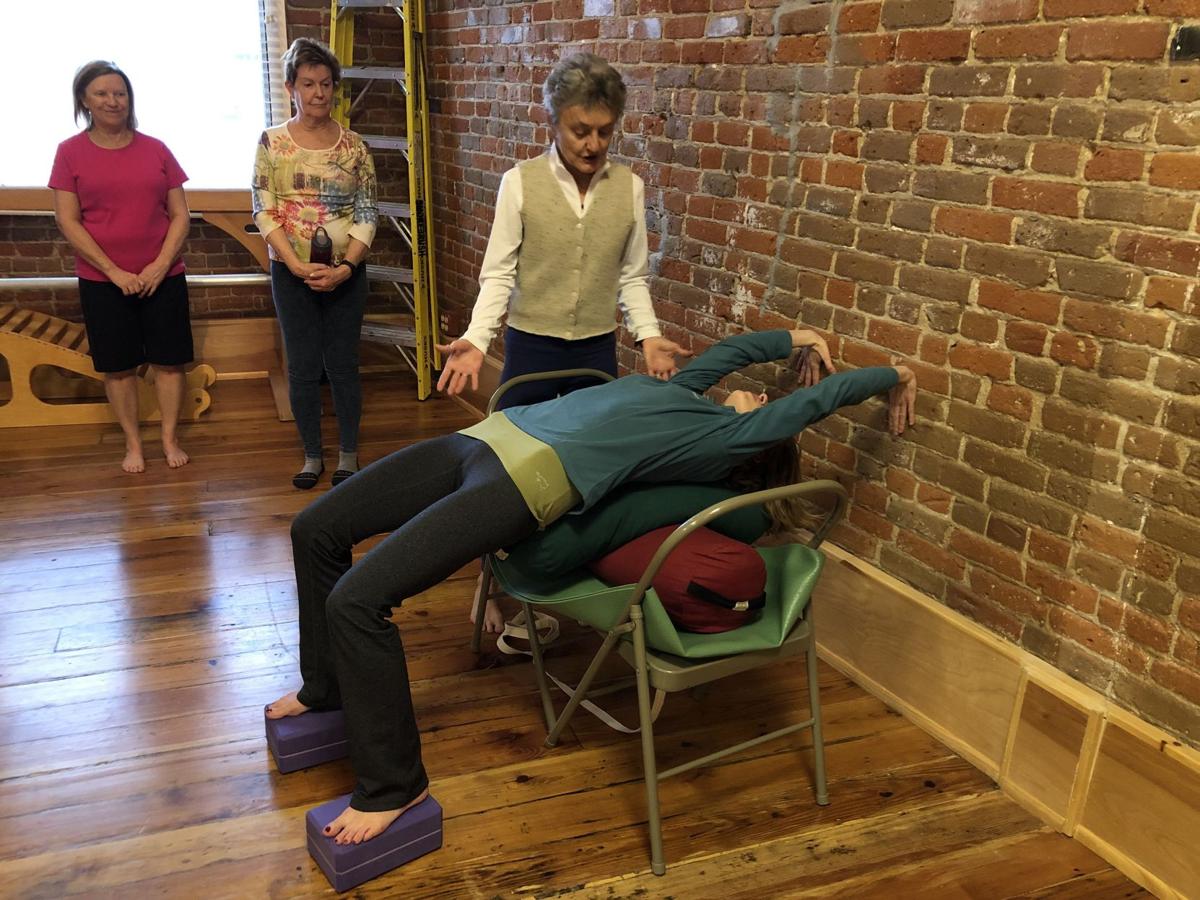 Iyengar teacher Cyn Hales (standing) guides yoga student Carrie Ruiz into a modified backbend during an Iyengar class at Marmalade at Smokebrush in The Trestle Building. 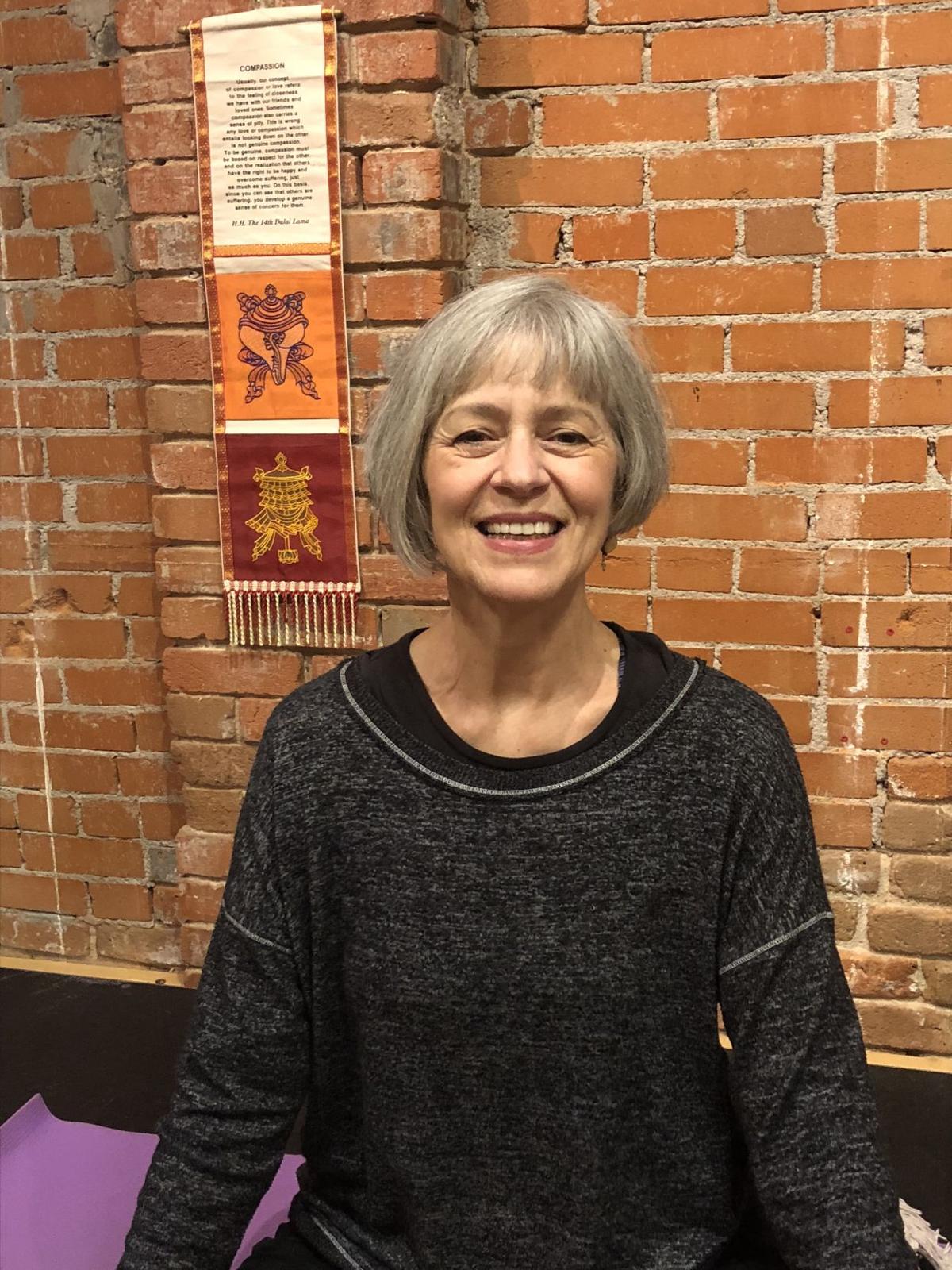 Iyengar teacher Cyn Hales (standing) guides yoga student Carrie Ruiz into a modified backbend during an Iyengar class at Marmalade at Smokebrush in The Trestle Building.

Yoga Lab is a hidden gem in the city’s yoga landscape.

This is a Thursday night refuge for yoga students, where those who have questions, issues, injuries or stumbling blocks within their yoga practice can come for guidance.

The weekly 90-minute class at Marmalade at Smokebrush in The Trestle Building is led by longtime Iyengar teacher Peggy Berg, who also teaches regular Iyengar classes in the same location. Iyengar yoga was developed by B.K.S. Iyengar and is known for its prodigious use of props, which can help heal injuries and get bodies into postures that might not otherwise be attainable.

Berg started Yoga Lab in October as a way to support students who are perhaps inching their way toward a home practice, versus only doing yoga in class settings. But no worries if you’re not ready for the big leap quite yet. She aims to help you develop more intention in your practice and learn to listen to the needs of your own body whenever and wherever.

“So you’re not a passive student, and the teacher isn’t telling you everything you need to do. You can interpret a pose in your own way for your own benefit,” said Berg. “Different people are different in terms of their ability of doing a home practice. They might not be ready to take on that aspect of practice, but this will certainly create a bridge for that, if they wanted to.”

Why I run: My journey back to Colorado Springs trails after a heart attack

Developing a home yoga practice makes a lot of sense. While attending class is beneficial, the teacher is still guiding a roomful of people who all live in different bodies with diverse needs. And it’s hard for a student, and usually frowned upon, to stop practicing in the middle of class to explore how a pose feels in their body and do their own sequence of movements or postures.

“You have a much greater capacity to go inward,” said Berg about practicing on your own. “And that’s where the true benefits of yoga happen. When you begin to listen to an inner voice rather than that of a teacher, you’re getting closer to the inner voice of soul. You’re connecting to deeper self.”

Yoga Lab topics so far include shoulder and knee issues, backbends and working on balance. Berg requires students to let her know by noon Thursdays if they’re coming and what they’re working on. That way she has a chance to plan out sequences and study texts.

So far, the lab has been a relatively small group, from two to six students. Though each class will typically tackle one topic, one week Berg broke the gathering out into older and younger groups because each needed a different sequence.

Every class includes movement. And sometimes, if the atmosphere is right and students are open, the discussion will break into a deeper conversation, and touch on yoga philosophy or branch off into a bigger view of a topic, such as when they worked on improving balance.

The lab is a place to embrace your curiosity about yoga and your own body. Berg invites all questions and topics, including breathwork and meditation.

“There is the opportunity for dialogue. People can talk about their experience and ask questions,” she said. “What it has done is brought in a lot of work studying the therapeutics of Iyengar yoga. You don’t do that in a general class. You don’t want to annoy a general group by sitting in a pose for five minutes while somebody feels what’s going on in their knees. It’s a different way to approach a broader understanding of why we’re doing it.”

Something else: You must RSVP by noon on the day of the class to Berg (pberg@coloradocollege.edu, 660-9569) and let her know what you're working on. If you don't have a question, you still can attend but must RSVP.